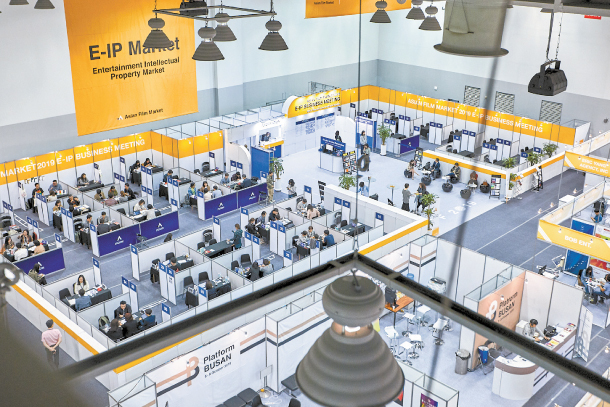 The Asian Film Market is where meetings take place between creators and authors and film industry insiders during the Busan International Film Festival. The market was held at Bexco Exhibition Center 2 in Busan from Oct. 5 to 8. [BIFF]

BUSAN - More and more, films and television dramas are being adapted from popular books, web novels and web comics. The process of using one source for multiple media adaptations is called One Source Multi Use (OSMU) and the place where the creators behind these properties meet film studios is the Asian Film Market (AFM) at the annual Busan International Film Festival (BIFF).

Here, artists and authors who have been carefully selected among hundreds by event organizers pitch their ideas to local or overseas filmmakers looking for new stories to tell. They each get to present their works for about 10 minutes.

The notable trend at this year’s market were stories that contained or reflected sensitive social issues such as misogyny, serial killers and the ever-sensitive relationship between Korea and Japan.

The Korea JoongAng Daily attended two of the events hosted by the market - the Comics & Film Pitching Show, which was co-organized by the Korea Manhwa Contents Agency, and Story to Film, which was co-organized by the Korea Creative Content Agency, to find out what stories peaked the interest of movie industry insiders. The following are some of the pitches presented during the event that may be turned into major motion pictures in the near future. 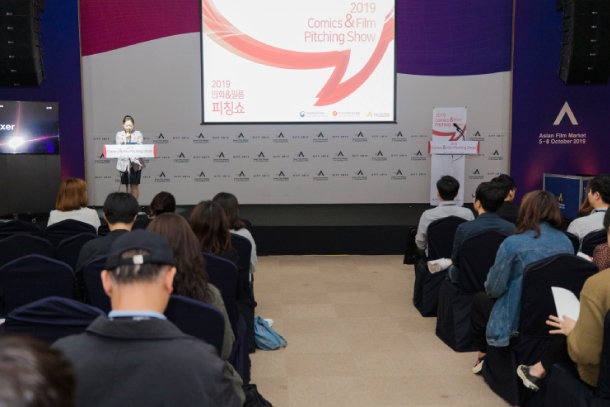 The M.C. of the Comics & Film Pitching Show kicks off the event on Sunday. [BIFF]

Seung-hee is a homicide detective who becomes famous on social media when she helps out a woman in danger of becoming a victim of a hate crime.

However, her fame ends up hurting her career and she is temporarily assigned to work in the Department of Women and Youth. There, she meets a popular teen YouTuber named Tae-hyun who says that his friend has been kidnapped.

Although the department dismisses it as a case of a runaway, Seung-hee believes Tae-hyun when he points out that recent pictures drawn by an artist working under a pseudonym “Vincent” - who is famous for depicting violence in his works - look eerily similar to his friend. The two set out to search for the mysterious artist and, hopefully, to find his missing friend.

Creator Kim Hyun-jung said in her pitch that she wanted to highlight crimes against women and the issue of gender polarization in her work. “Women are striking back,” Kim said. “They’ve been holding back for years, and I wanted to show how scary it could be when they don’t.”

Seo-wu is an 18-year-old high school student who is 183 centimeters (6 feet) tall and looks more like a handsome boy than a girl. Because of her physique, she works as a fit model for men’s clothing at an online shopping outlet to support her family.

Labin is a senior at a prestigious fashion school who happens to come across a photo of Seo-wu that catches his attention. He is gay but hides his sexuality due to his social standing as a son of a chaebol. He immediately contacts Seo-wu and proposes that she works as a model for his graduation fashion show, offering her money that she can’t refuse.

While they work together, Labin becomes irresistibly attracted to Seo-wu, but never does he imagine that Seo-wu is a girl.

Queen Jeonghui (1455-1483) served as a royal regent for her son and grandson and is considered by the historians to be one of the most powerful female rulers of the Joseon Dynasty. But it is also well-known that the queen was illiterate. How was that possible?

She could, however, have her most devoted servants read and write for her whenever she wanted them to. And that is what she does when she finds a clever girl named Se-yeon and appoints her as a court lady before she is whisked off for marriage. For Se-yeon, who loves to read and write, this is chance that she eagerly takes. Due to her resourcefulness and quick wit, Se-yeon is soon promoted as a royal concubine that records all the queen’s orders. Se-yeon dreams of a world where women can write and express their opinions as freely as men and begins to teach other royal servants how to read and write too. But the bond between the queen and Se-yeon becomes dangerously close to being broken when King Sejo begins to show interest in Se-yeon.

The story is about the complex relationship between two women - a powerful ruler and her most trusted and clever servant - and is loosely based on historical findings.

When she browsed through her favorite comic depictions of Greek and Roman mythology from her childhood, creator Moon So-in noticed that there were no feminine monsters within those many stories. So she decided to write their story herself.

When Julia finds a monster locked up in her aunt’s mansion, she finds it captivating. The beautiful monster is Eros, who Julia falls in love with. When she is with the monster, Julia feels loved. The people in town dislike Julia, who lives all by herself in a big house away from the rest. And their dislike may turn into hatred that may get in the way of Eros and Julia’s relationship. 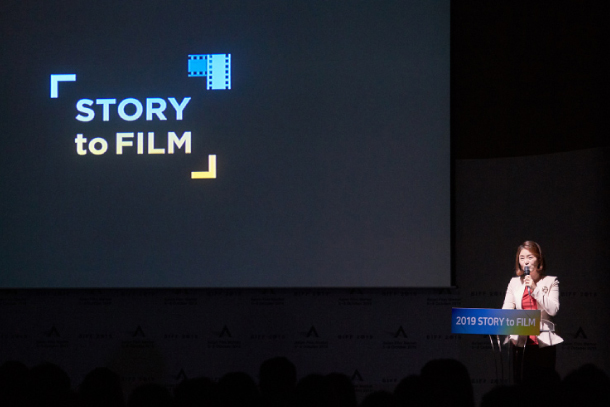 An M.C. opens the Story to Film presentation on Sunday. [BIFF]

Seung-jun is a well-to-do office worker at a big conglomerate. He believes that all he needs now is a serious girlfriend who he hopes to marry someday.

Seung-jun is walking by a protest held by feminists when he sees a girl wearing a mask making eye contact with him and starting to follow him. Scared, he tries to run away but is soon is caught by the girl. When she takes off her mask, he realizes that it is his first love, with whom he broke up with four years ago when Seung-jun decided to take an internship overseas.

Seung-jun decides in that moment that fate had brought them together and that she is the girl that he will marry. She is one of the “feminists,” but Seung-jun thinks that she must have became a feminist because she suffered from too much heartbreak in the past. Determined that he can “heal” her, he persistently asks her out and finally, she gives in, under one condition: The first one to break up their relationship has to pay the other one million won ($837).

The story is based on the author’s personal experiences and takes a look at feminism and gender equality from the perspective of a man.

When Joong-gi hears the news that Kim is not only alive, but living well behind bars, he attempts suicide. However, a detective named Kim Hyung-joo appears before his eyes and stops him with a tempting proposal: He will help Joong-gi enter the prison to kill Kim and avenge his family. Joong-gi accepts, and he soon enters the prison world that has protected the killer all along.

The idea for the story comes from the actual case of serial killer Yoo Young-chul, who killed 20 people from September 2003 to July 2004. He remains alive, but is in prison for life.


King of the World

During the reign of King Cheoljong (1849-1863), the palace is a bloodbath, with people killing off one another in order to be the next to get the throne.

Heungseon Daewongun is one of the royals who looks for ways to survive in the palace, when he meets Baudeogi, who leads a namsadangpae, a pack of entertainers who travel around the country to amuse crowds with their natural acting talents. When the Daewongun sees Baudeogi, he immediately recognizes her flairs as an entertainer and is determined to learn from her.


Yongbok: The Chief of Tax of Ulleungdo and Dokdo

“It’s the hottest topic of the year.” Writer Park Joong-rae started his presentation with these words. The story is a historical fiction based on a real story about local fisherman Ahn Yong-bok, who lived and fought to acquire fishing rights in the waters of Ulleung Island and the Dokdo islets during the reign of King Sukjong (1674-1720).

Ahn was fishing near Ulleung Island when he clashed with Japanese fishermen in the area. He and his friend Park Eo-dun are captured by the Tokugawa shogunate (the final feudal Japanese military government) and fight for their land and fishing rights. Ahn even requires a note from the government stating that Ulleung Island is part of Joseon. On his way back, however, the document is confiscated by Japanese forces.

Ahn soon realizes that he had become a pawn of Japan’s elaborate scheme to take Ulleung Island as its own under the Japanese name Takeshima. Enraged by Japan’s conduct and incompetence of the current administration to fight for their land, Ahn calls himself “The Chief of Tax of Ulleungdo and Dokdo” to get rid of Japanese fishermen and protect the land.