With the 2019 season for the Los Angeles Dodgers coming to a shocking conclusion at home on Wednesday, Ryu Hyun-jin is off to free agency, angling for perhaps his last multiyear contract in the MLB after seven years in California. 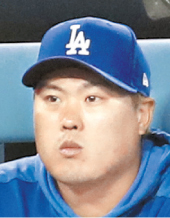 The Dodgers were eliminated in the National League (NL) Division Series by the Washington Nationals, losing 7-3 in a stunning Game 5 at Dodger Stadium.

“Everybody played hard and tried to win this game,” the somber Ryu said afterward. “We had a great regular season, but things didn’t go our way in the end. I am sure everyone here feels the same way.”

Ryu was the winning pitcher in Game 3 of the series, when he gave up two earned runs in five innings as the Dodgers won 10-4. He had volunteered to pitch in relief in Game 5 if need be.

Instead, Ryu may have pitched his last game for the Dodgers, a team he joined from the KBO in 2012. He signed a six-year, $36 million contract to become the first Korean player to jump from the KBO to the MLB.

But the left-hander missed the entire 2015 season following shoulder surgery. He made one start in July 2016 but was shut down with elbow issues.

Ryu returned to the rotation full-time in 2017, but only went 5-9 with a 3.77 ERA and was left off the Dodgers’ postseason roster as they made a run to the World Series.

He made 15 starts in 2018 due to injury but posted an excellent 1.97 ERA with a 7-3 record. Ryu was eligible for free agency last winter, but accepted the Dodgers’ one-year qualifying offer of $17.9 million.

Ryu put together his best season in the majors in 2019, leading all qualified pitchers with a 2.32 ERA and matching his career high with 14 wins. Ryu was the Dodgers’ Opening Day starter and also the NL starter for the All-Star Game. He earned the NL Pitcher of the Month award for May.

Ryu issued the fewest walks among all qualified starters with 24 and had the lowest walks per nine innings in baseball with 1.23. His strikeout-to-walk ratio of 6.50 places him second in the NL. He even smacked his first career home run on Sept. 22 against the Colorado Rockies.