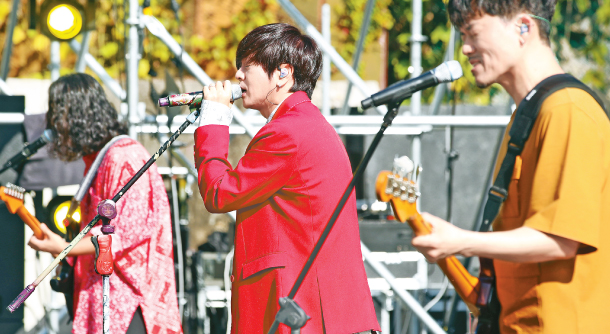 There are many rock bands in Korea, but none are quite like YB. The five-member band - vocalist Yoon Do-hyun, guitarist Heo Jun, drummer Kim Jin-won, bassist Park Tae-hee and guitarist Scott Hellowell - have dominated the Korean rock scene since their debut in 1996, and they’re back again to prove why they’re No. 1.

The band released their 10th full-length album “Twilight State” on Thursday and performed songs off the project at a press showcase held outdoors at the Oil Tank Culture Park, western Seoul on Friday prior to meeting fans in the evening at their “Healing Concert 2019.” The unusual outdoor setting for the press showcase was intentional, according to Yoon.

“This place is called the Oil Tank Culture Park,” he said. “Not only do we hope to see more cultural performances take place at this place, we will also be holding a concert dubbed the ‘Healing Concert.’ It’s about helping save the environment, which we also stand for. We believe it’s more exciting both for the audience and for us.”

The band has remained active since their debut, releasing singles and EPs over the years, but “Twilight State” is their first full-length album since “Reel Impulse” was released in June 2013. And putting together their 10th album was no easy task.

“Every album has its pressures, but the idea of putting a 10th album out [gave us more pressure] than ever,” he said. “But as YB, our motto is always to be honest, to express what we have inside of us. So we tried our best until the end.”

Yoon even spent two months all alone in the mountains searching for musical inspiration for the album two years prior to its release.

“Creation inevitably comes with both pain and joy, I think,” he said. “It was so painful and lonely while I was making it. But the joy of seeing the results - that can’t be compared to anything.”

While rock bands often sing about the darker sides of life, YB’s music has often been praised for its positive and optimistic messages behind the powerful sounds that often drive listeners to tears, such as songs like “A Flying Butterfly” (2007) and “Blue Whale” (2011). “Twilight State” is no exception, with its 13 tracks that will remind listeners of an autumn night.

“We’ve always made music that’s hopeful and gives people the energy to move on, and we’d like to keep that side of ourselves,” said Heo.

The album has three lead tracks because the members of the band “failed to choose just one” - “Sangsu Station,” “Birthday” and “Distractions.” Of them, “Sangsu Station” is probably the most emotional, especially when watching the music video, which revolves around the friendship of a young boy and an old musician.

“We started our music career in the 1990s, and I believe that our fans grew up with us,” Yoon said.

“So the old man in the video is that person who began his music in the 1990s, and the little boy is the younger generation seeing that. This kind of friendship might not be possible in real life, but we wanted to make something beautiful happen in the video.”