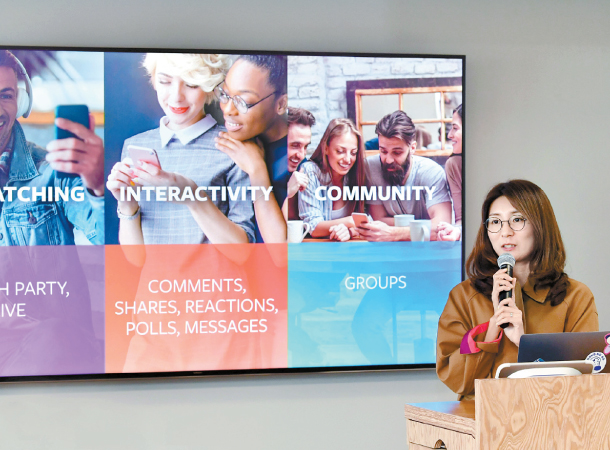 Facebook Korea on Friday said it hopes to connect its users through videos with a YouTube-like landscape for creators.

The social media giant, which also owns Instagram, made a foray into the video-streaming market with Facebook Watch in 2017, featuring original video content. But the company last year expanded its service which could lead to monetization opportunities for video creators.

Added features include interactive polling for live and on-demand videos, and watching videos with others while sharing comments in real-time.

“Facebook Watch offers the most social environment for users to watch and share videos,” said Park Hye-kyung, leader of the Media Partnership Team at Facebook Korea, at a press conference in Gangnam, southern Seoul, on Friday.

“The environment people watch videos in matters just as much as the kinds of videos they watch. We believe offering more space for creators to post videos and share them [on Instagram and Facebook] builds firmer links [between creators and viewers].”

The new features of Facebook Watch were introduced globally in August last year, but the number of people that use the service still seems limited.

Since the introduction, 140 million people on average spend at least a minute on Facebook Watch every day as of June. Facebook has more than 2.3 billion daily active users.

Facebook Korea refused to give a figure for Watch users in Korea.

For creators, the threshold to qualify for monetization with Facebook Watch includes reaching at least 10,000 followers in a Facebook page and getting more than 30,000 views for at least one minute of a three-minute video. Advertisements are often added to three-minute videos.

“The goal of Facebook Watch is to provide a social watching environment and cater to videos based on sharing and sympathy,” said Park.