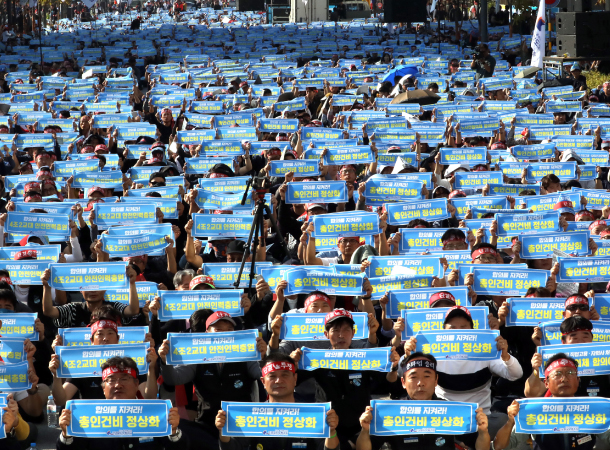 Rail union workers hold signs outside the Finance Ministry’s headquarters in Sejong on Friday. Their strike is expected to last until Monday morning at 9:00 a.m. [NEWS1]

Seoul Station was oddly calm on Friday afternoon as rail services were disrupted after workers went on a 72-hour strike that will last until Monday and cancel some - but not too many - train journeys.

An electronic sign board at the station urged passengers to check train cancellations, while banners strung by the Korea Railway Workers’ Union (KRWU) across the waiting room spelled out the union’s demands for higher wages and more hiring.

The strike created confusion among passengers after around 95,000 reservations were canceled due to scheduling changes over the three-day period.

KRWU members were striking from 9:00 a.m. Friday until 9:00 a.m. Monday due to disagreement with management over wage negotiations. The union represents workers of the state-backed rail operator Korail.

The operator expects the average operation rate over the three-day period to be at just over 80 percent.

Korail said cargo rail operation will be running at 32.1 percent over the period, only transporting emergency or essential industry items.

Labor laws mandate the passenger rail industry to maintain a certain amount of workforce during strikes as it is considered an essential industry.

All ticket cancellations or changes during the strike period will be exempt from penalties and Korail said it will provide full refunds for train trips that have been canceled.

Korail nevertheless faced a workforce crunch during the strike as only 9,616 workers will continue working under the mandated rules. The company was to introduce a replacement workforce of 4,638 for the strike period. That total of 14,254 workers represent just 61.9 percent of the 23,041 workers during normal operations.

Meanwhile, the Seoul Metro union, which represents workers for the capital city’s subway system, will conduct protests instead of a general strike over wage negotiation disagreements until Oct. 15. Seoul Metro said the protests are not expected to reduce operations during the period although they might lead to delays.

For the KRWU strike, the union has called for total wages to rise by 4 percent compared to a government guideline of 1.8 percent for state-backed firms. It has also argued for more hiring next year in order to transition into a system in which four teams are responsible for two shifts from the current system of three teams working two shifts. The union has maintained that more hiring is needed to accommodate the new system to be introduced next year and intended to help conform with the government’s 52-hour workweek law.

Labor and Korail have failed to come to terms after 16 wage negotiations since May.

Korail CEO Son Byeong-suk made a public apology on Friday for the reduced operations caused by the strike, promising that talks with labor will continue.

Son explained that the union’s demand for wage hikes above the government guideline would be difficult to accept.