30-somethings are buying up homes

30-somethings are buying up homes 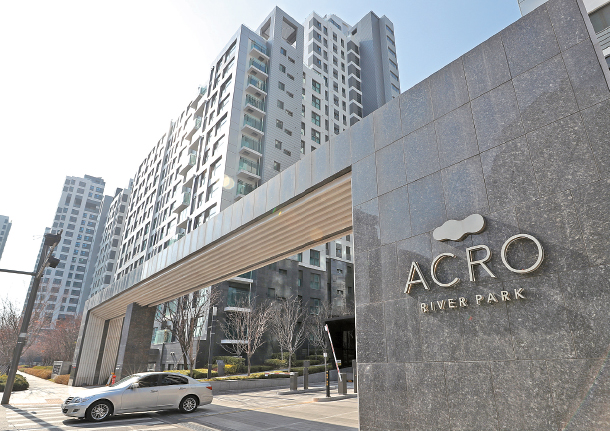 The entrance to the Acro River Park apartment in Banpo-dong in Seocho District, southern Seoul. [NEWS1]

It was a 36-year-old who lives in the affluent Apgujeong neighborhood in Gangnam District, southern Seoul, who recently purchased an apartment for roughly 130 million won per pyeong ($3,082 per square foot).

In July, it was another 30-something-year-old who purchased a 174 square-meter apartment in a high-rise Tower Palace apartment in Dogok-dong, Gangnam District for 3 billion won.

These two 30-something real estate purchasers are just two examples of a new trend in the Korean housing market. It turns out that behind the rising housing prices in Seoul is the growing number of people their 30s splashing out on real estate, and now purchasing more property than people in their 40s.

Market experts say the recent purchases by younger consumers are because of anxiety over rising housing prices. A lot of younger purchasers feel as though they missed out on the chance to buy in 2017, when housing prices really picked up.

“People in their 30s are feeling anxious due to the rising apartment prices and small chance they have in bidding for new apartments,” said Park Won-gap, senior real estate analyst at KB Kookmin Bank.

So how are these 30-year-olds finding the finance in purchasing these expensive apartments in Seoul?

The 15,463 apartments that have been sold since July went for an average of 820 million won.

The 2,804 units in the three popular Gangnam districts - Gangnam, Seocho and Songpa - were sold for an average of 1.5 billion won.

If a prospective buyer does not own an apartment in Seoul, they can borrow up to 40 percent of the value. Since the apartments that were sold since July on average went for 820 million won, each buyer could have borrowed up to 328 million won. To get this loan under the debt-to-income ratio limit of 40 percent, the person has to earn more than 60 million won.

For the three Gangnam districts, the maximum loan that one can borrow would be 600 million won. The borrowers income needs to exceed 110 million won and they would also have to have around 900 million won of their own money.

According to Statistics Korea, the average annual income of people in their 30s that are employed is 60 million won.

Those that purchased apartments in Seoul would have to be earning more than the national average for their age group.

There are only a handful of people in their 30s that make 100 million won a year in annual income, even while working for leading Korean conglomerates. Even if both husband and wife have high-paying jobs, the figure is still high.

Industry experts say the 30-year-olds with that amount of money are those that have high-paid professional jobs like doctors and lawyers or are the children of conglomerate owner families, successful start-up entrepreneurs or celebrities.

“There are a lot of hagwon [cram school] teachers that are cash rich,” said Lee Wol-moo, co-head of Midmi, a real estate company.

But there are also those that inherited huge sums from their parents.

The government is speculating that some of the young people that purchased real estate illegally inherited the money that was used to buy the apartment.

The Land Ministry last week announced that it would be intensifying its investigation into illegal real estate purchases.

The government said it is focusing on 1,200 cases where apartment purchases between August and September are considered suspicious and may have involved illegal acts including illegal inheritance and illegal loans.

“The overstretched purchases of those in their 30s and purchases suspected of illegal means show the unstable and twisted status of the housing market,” said Ham Young-jin, head of the big data department at Zigbang, a real estate app.