Kim Soo-mi has a lot on her plate: The TV legend is generous on stage and in the kitchen

Kim Soo-mi has a lot on her plate: The TV legend is generous on stage and in the kitchen 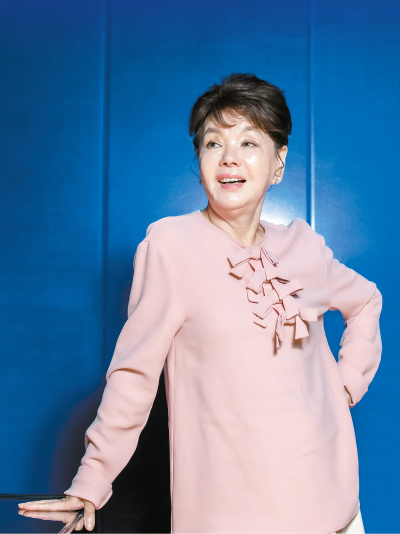 Actress Kim Soo-mi turned 70 last month, but she is living proof that you can be in the limelight at any age.

With two TV shows - “Mom’s Touch” on tvN and “Bloody Life Class - The Best One-Shot” on MBN - under her belt, the actress is now cooking and serving hearty bowls of gukbap, soup served with rice, to guests through the newly-launched TV show “Are You Eating Well?”

The septuagenarian also appears in the musical “My Mother” four days a week. After receiving positive reviews, the musical recently announced that it will be staging the show in other cities outside Seoul until March, keeping the actress busier than ever before.

In addition to that, Kim is scheduled to appear in the KBS2 drama series “Woman of 9.9 Billion” starting November. In the series, she will play a big wig in the loan shark business.

Kim is also trying to reach broader audiences with her podcast “Sibang Counseling Center” which is available through Naver Audio Clip. On the show, she provides solutions to those who have worries.

It is no exaggeration to say that Kim is in the midst of another heyday.

In fact, she is even more adored now than she was four decades ago when she began to make a name for herself playing the role of Il-yong’s mother in the hit series “Diary of a Rural Village” (1980-2002).

In the drama, which depicted the everyday lives of people living in rural Korea, Kim portrayed a foul-mouthed yet warm-hearted mother in her 70s. She was 31 when she started playing the character. Other actresses her age were not willing to play the role, but Kim didn’t care.

Thanks to the role, Kim became one of a few celebrities who have the freedom to say some harsh words because it was a part of her character.

After playing the elderly woman in the “Diary of a Rural Village” for 22 years, Kim has appeared in projects of various genres, from sitcoms to gangster films to variety shows.

The latest chapter in Kim’s career seems to owe a lot to her natural-born cooking skills. Her ability to whip up humble ingredients into savory dishes has drawn praise from viewers of all ages.

“No matter how tired I am, I find myself jumping up when I see ingredients for kimchi,” said Kim during a recent interview with JoongAng Ilbo, the affiliate of the Korea JoongAng Daily. 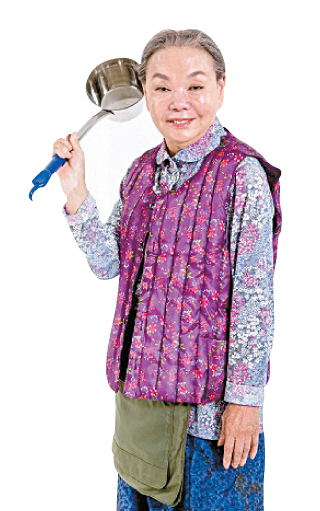 She was known to prepare daily meals for the entire cast and crew of “Diary of a Rural Village,” which is no surprise considering the fact that she used to host cooking shows on TV in the 80s and has even published some of her own cookbooks as well.

Then and now, Kim makes all kinds of kimchi and side dishes using ripe ingredients depending on the season and gives them out to people around her. That is one of her regular routines.

Having 14 refrigerators at home, all stuffed with kimchi, side dishes and condiments, Kim often invites her friends over to her house.

At home, Kim uses an electric rice cooker that is capable of preparing 50 servings.

“When certain kimchi or gejang is ripe, I call people around me so that they could come and eat. Some even drop by with rollers in their hair. I can easily have up to 10 guests [with a few calls].”

Gejang is a dish of raw crab marinated in soy sauce, and Kim is known for her expertise in the dish - so much so that she used to sell her own on home shopping TV channels.

The actress says cooking runs in her blood. “I think I was born with it.”

Born in Gunsan, North Jeolla, Kim remembers eating at table so full of dishes that she “had to stack the dishes” in order to fit everything on the dining table. But when she moved from Gunsan to Seoul at the age of 13 to study, Kim found herself eating with only one side dish of pickled radish.

When she was 18, Kim’s mother passed away, and soon after she began reproducing her mother’s dishes.

“I had a craving for my mom’s fresh kimchi and marinated young hairtail fish when I was pregnant, but I couldn’t eat them so I wept. Around that time, I began to give it a try and make the things my mom used to make for me.”

Q. A recent survey listed you as the 21st most powerful female celebrity in advertising. Of the top 50 female celebrities, you are the oldest. What’s the secret to your popularity?

A. I would say now is my third peak since I debuted in 1970. The first one came when I did the drama series “Diary of a Rural Village” and the second came along with some films such as “Marrying the Mafia” (2002) and “Mapado” (2005). This time, it all started with cooking and I feel like this is the strongest one. Even all the ladies I have met at the sauna in my neighborhood come up and talk to me. I think one reason [behind the success] is that I have tried to keep it real and communicate with the viewers with all my heart. 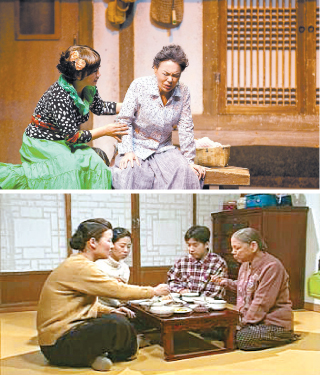 In the newly launched TV show “Are You Eating Well?” on SBS Plus, top left, Kim cooks and serves gukbap, or soup served with rice, to guests. Kim’s character in an upcoming TV show is adopted from her character in previous drama series “Diary of a Rural Village” (1980-2002), top. In the drama, Kim played a foul-mouthed yet warm-hearted mother. Kim also appears in the musical “My Mother,” above. [SBS PLUS , JOONGANG ILBO, SHOW 21]

The cooking show “Mom’s Touch,” launched last June, is hugely popular. Of all the types of food, why did you choose ordinary banchan (side dishes)?

More and more people spend less time cooking at home. A lot of people also eat alone and merely stuff their stomach with food. But many people often say they work to eat when they are asked what they live for. I feel pity for them. Preparing food with care is a way to love yourself. And you can develop bonds when you share food. Things go smoothly when you eat together with someone. I wanted to inform young people about this culture.

Why did you teach male actors your age how to cook basic side dishes during a recent episode of “Mom’s Touch”?

Grandpas who live by themselves do not eat nutritious meals. What if they get cancer one day?

You’ve been appearing in the musical “My Mother” since its premiere in 2010. Despite your busy schedule, you have never missed a performance. Why is that?

What kind of mother are you off the stage?

I make everything my daughter wants to eat. She and her family left for the Czech Republic two months ago for work. My husband will go there soon to meet them, so I’m making all the side dishes my grandchildren love to eat such as sweet and salty black beans and seasoned dried squid. I tell my daughter, “I’m so jealous of you. You’re so fortunate [to have a mother who cooks for you].”

How do you keep in shape with your busy schedule? You have three shows along with the musical, the upcoming drama series and the audio show.

I wake up at 5:30 every morning. I wake up, work out and go to the sauna every day. And then I start making side dishes for two hours at 7:30 a.m. I can make up to 50 portions in about two hours. After that, I go to the set. I tend not to make any appointments at night. I go to bed at 11 p.m. at the latest.

My father once took me to my house in Seoul when I was a middle school student and he told me “You shouldn’t roam around at night because you have big and beautiful eyes. If you are dragged to a brothel, you won’t be able to see me forever.” I was so freaked out that I have gone home when it starts to get dark ever since.

I want to be remembered as a legend. There is a song called “The Leopard of Kilimanjaro” and the lyrics go like this: “I can’t come like wind and go like dew. I have to leave the traces of me living here once.” I tell myself, “I can’t go without doing anything.” I want to be remembered as an actor as well as a [good] person. I hope I can hear people saying “I was helped by Kim Soo-mi.”