Park Ji-hae calls for peace for the Koreas

Park Ji-hae calls for peace for the Koreas 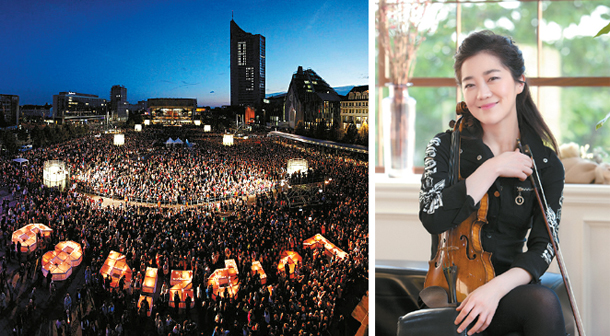 When Korean violinist Park Ji-hae drew her bow for the final time after her impassioned one and a half hour solo concert at St. Nicholas Church in the East German city of Leipzig on the evening of Oct. 9, the audience members, about 30,000 according to German media, expressed their impression of the gripping concert with a standing ovation.

Such large audiences or renowned international stages are not something that Park is unacquainted to. But this concert she just had in Germany, says Park, was perhaps one of the most breathtaking moments for the 33-year-old violinist. That is because Park’s solo concert was the final program that wrapped up this year’s Lichtfest, or the Leipzig Festival of Lights, in Germany. 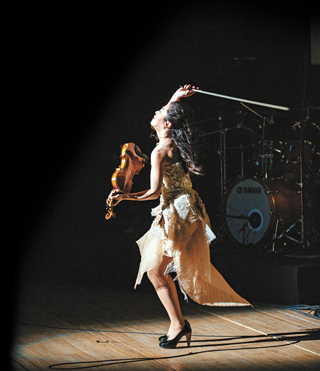 Every year for the past decade, the streets of Leipzig have been lit up on the evening of Oct. 9 with thousands of candles as its citizens and visitors from around the world gather to celebrate Lichtfest, which was established to commemorate the peaceful demonstration that took place on Oct. 9, 1989, by some 70,000 Germans who gathered together at St. Nicholas Church, calling for freedom and democracy in the German Democratic Republic, which many Germans believe acted as a decisive catalyst for the start of the Peaceful Revolution that finally led to the fall of the Berlin Wall.

Park, who was born and raised in Germany, was invited to perform at this year’s festival, which celebrates the 30th anniversary of the first gathering in 1989, by the Friedliche Revolution Foundation in Germany. For Park, who has been expressing her strong desire to bring peace to the Korean Peninsula through music, the solo concert for the Lichtfest not only allowed her to play her violin, but also send a message of peace, which was a “priceless” experience.

“Just being in that historically significant place exactly 30 years after the peaceful demonstration which helped write a new chapter of history for Germany took my breath away,” said Park in an interview with the Korea JoongAng Daily. “But being able to join in that gathering and being the one who could ask the thousands of audience members to also pray that freedom and peace can reach the divided Koreas like it did in Germany through music and culture is beyond words.”