Korean contemporary dance company Modern Table performs “Velocity,” or “Sok-do” in Korea, left, at the 300-seat The Place in London on May 31, right. [THE PLACE]

On May 31, Korea’s all-male contemporary dance company Modern Table, led by Kim Jae-duk, showed off their uniquely refreshing performance of “Velocity,” or “Sok-do” in Korean, at London’s The Place for the first time. Modern Table’s performance was followed by several other dance troupes from Korea for the next couple of days. The groups left an impression on audiences while introducing musical instruments that were unrecognizable to most Londoners. Word quickly spread around the city already saturated with contemporary dance that The Place, one of the oldest dance theaters in Britain, was on to something.

“When I first saw Modern Table last year in Seoul,” said Eddie Nixon, the artistic director of The Place, “I instinctively knew that they’ll work in London.”

Nixon is the man who selected the five contemporary dance troupes from Korea and, with support from the Korea Arts Management Service and the Korean Cultural Centre UK, invited them to perform at The Place for A Festival of Korean Dance. During his visit to Seoul last October - a month when nearly every corner of Seoul is busy with festivities like the Performing Arts Market in Seoul (PAMS) and Seoul International Dance Festival (SIDance) - Nixon hand-picked the dance troupes he believed would appeal to European audiences.

Using last year’s trip to Seoul, which led to this year’s successful festival in London, as a trigger, The Place and the Korea Arts Management Service decided to launch a three-year program. For this, the Korea Arts Management Service invited Nixon back to this year’s PAMS, which kicked off on Oct. 7 and ran for four days as part of the Seoul Performing Arts Festival (SPAF). The festival continues until Oct. 20 at various venues across Seoul. 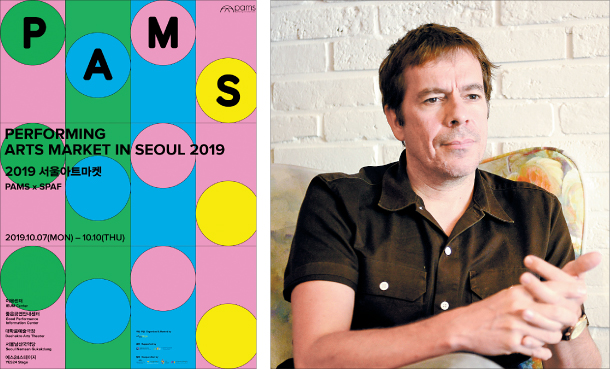 Left: The poster for this year’s Performing Arts Market in Seoul (PAMS), which was held from Oct. 7 to 10. Right: Eddie Nixon, artistic director of The Place in London. [KOREA ARTS MANAGEMENT SERVICE]

The Korea Arts Management Service has organized PAMS every October under the support of the Ministry of Culture, Sports and Tourism in an attempt to revitalize the distribution and export of Korean performing arts to overseas markets. It has been acting as a platform where overseas production companies and people involved in theater can visit and see Korean performances live while offering a time and place to network and possibly sign a contract. PAMS selects outstanding works first and supports them to stage their works before potential buyers. This year, eight companies have been selected as PAMS Choice, including contemporary dance companies like Duo Bud, Brush Theatre LLC, Elephants Laugh, Modern Table, Choi X Kang Project, Goblin Party, Dongyang Gozupa and Seo Jung-min. These PAMS Choice finalists got to present their works at different venues in Seoul on different dates. Meanwhile, the SPAF, which is more widely enjoyed by the general public, includes performances both by local and international troupes.

Some of the performances that are still available include a Korean play titled “Camel Xiangzi” directed by renowned Korean director Koh Sun-woong. The original story is an adaptation of a Chinese novel of the same name that was published in 1937 by Lao She (1899-1966), who was one of the best known humanist authors in modern Chinese literature. It depicts the life of a fictional Beijing rickshaw boy. The novel was translated into English in 1954 and is widely known in the Western world as well. The play will be staged at the Daehakro Arts Theater in central Seoul from Oct.17 to 20.

As for a noticeable work from abroad, a Belgium play titled “The Forgotten Land” will be staged for three days only at the Arko Arts Theater from Oct. 18. Directed by Jean-Michel d’Hoop, this play is based on the testimonies of people from the Chernobyl region.

While Nixon is in Seoul, the Korea JoongAng Daily sat down with him for an interview in Daehangno, central Seoul, to learn more about the Korea-U.K. project. The following are edited excerpts from the interview.

Q. Five Korean contemporary dance companies have already gotten a chance to perform at The Place. As I know, that turned out quite well and that is why The Place and the Korea Arts Management Service are turning this into a three-year project, right?

A. Over the past few years, we’ve been making plans with the Korean Culture Centre in London and Performing Arts Market in Seoul (PAMS) organizers to think about the presence of Korean dance practice in London. We were discussing the possibility of having a festival of some sort to have more visibility. Since I am the artistic director of the theater, we could talk about having a festival with a specific country focus. Usually, I’m not so keen on this idea. But I think the scene in Korea is so particular. The quality of some of the works are really, really high, but many of them don’t often travel to London. So I felt like it was a really important opportunity to share.

So, I came last October to Seoul to watch some performances, and that’s when we talked a lot about our ambitions. I got to meet a lot of artists and saw many videos as well. It doesn’t happen every time, but luckily The Place was allowed to curate this festival focusing on Korea that’s suitable for London. This was quite important for me because the dance scene in London is quite rich already, so I had to select the dance troupes and pieces really carefully. The works had to add something different in flavor than what’s already there. I was looking for things that I thought people in London would be really curious to see because as I said, there are many things already there.

Why weren’t you keen on the idea at first of having a country-specific focus?

That’s because I don’t like to exoticize things. I think when you are putting on a performance of a different sort, you have to be very careful. Theaters, promoters and media - we tend to somehow put a little box around a work that could provide messaging before showcasing it. For example, we won’t do a festival of dance by artists [who are disabled] - rather, [those] artists could be included in many of the works that are staged at the theater. I try not to put a circle around the works. As for countries that have deep colonial history like Korea, I wanted to try to be really careful about it not to make it look exotic and resist messaging. Instead, I wanted audiences to focus more on quality of dance and artists.

But I noticed there’s a particular scene in Korea and in Korean contemporary dance. Somehow, it comes together. The contemporary culture of Korea is very deeply rooted in its tradition that it was very unique and particular. For the Modern Table for example, it could only come out of Seoul I think. It’s a very special contemporary expression of dance that can be brought together only in Korea, so I really wanted to show that to the people in London.

Were there particular performances that caught your attention during your trip this time?

Last year I got to see about 20 performances, but this year, I think I can only watch about 10. I got to see a lot of the street performances this time and that was very interesting as I can have a better understanding of the Korean culture. I especially enjoyed watching Art Project Bora’s performance of “Muak,” although it was a part of a SIDance festival. The show touches on the violence of being stereotyped through using a piano. Dancers dance around this old piano, and they start to dismantle it. I think this performance was very specific and clever in the way the choreographer used the physical language. The dances were so precise, so rhythmical, and it kind of neutralized the violence.

This kind of experience is exactly why I come here. Watching such a performance live provides you with an entirely different experience to watching it on video. This kind of opportunity to come to Seoul and do this research is really helpful.

Can you briefly introduce The Place?

Sure. It’s one of the oldest organizations for contemporary dance in the world. We just celebrated our 50th anniversary. It does lots of things, and we have undergraduate and postgraduate colleges as well. We have big community dance programs, and we have a 300-seat theater that presents both national and international performances. We also work with professional artists to produce commissioned works and tour their work as well. But what’s important is that we concentrate on contemporary dance as an organization. As you can notice on my business card, “Dancing for Life” is our tagline. We try to include everybody in the world of dance, whether you are five or 75. We believe everybody can dance and should dance.

What do you think of the contemporary dance scene in Korea?

The things I noticed in the European context is that the technical level of the Korean dancers is extraordinary. I would probably say it’s the best in the world. Not only they are excellent technically, but also the adaptability and physicality of the dancers is so good. The dancers are capable of lots of different ways of moving, which is really incredible to watch. I also noticed that Korea is similar in size with Britain, but there are so many choreographers. The number is always increasing and young artists seem to be making new shows all the time. You know, being characterized with a sense of physicality is really important. It’s quite different from some of the European countries where dancers are moving toward the kind of performances that are taking conceptual approaches to dance. Here, it’s very rooted in the body.

How do audiences in London receive Korean contemporary dance?

I can’t speak for all of them, but I suppose, as an audience member myself, my perspective is that I think people in London would have noticed the sense of physicality after watching performances by the Korean companies and saw that they were really different from European dance.