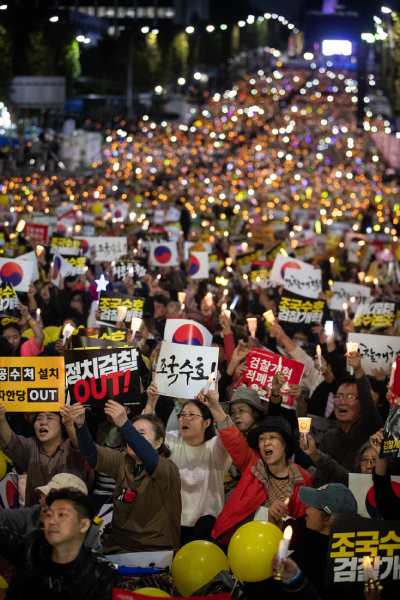 Chung Kyung-sim, wife of embattled Justice Minister Cho Kuk, returned home on Sunday morning after nearly 17 hours of questioning at the Seoul Central District Prosecutors’ Office in Seocho District, southern Seoul, the fourth time she was summoned about a cascade of allegations engulfing her and her family.

Prosecutors are expected to summon her one to two more times in the coming days, after which they will decide whether to file a request for a pretrial detention warrant for her.

Chung, 57, an English professor at Dongyang University in Yeongju, North Gyeongsang, faces allegations that she fabricated an award for her daughter to help her get into medical school and operated a private equity company that was allegedly involved in suspicious investments.

Prosecutors said Chung arrived at the prosecutors’ office at 9 a.m. on Saturday and was grilled through 5:40 p.m. In the following eight hours, Chung and her lawyer reviewed the statements she had given to prosecutors to make changes to parts she felt misrepresented her. Chung left the building at around 1:50 a.m. Sunday.

By law, suspects are allowed to review notes that prosecutors take of their questioning and make any changes by crossing out those specific parts with a pen and personally writing down what they had intended. They finalize the changes with their thumbprints.

Like in the first through third questioning rounds, Chung entered and left the Seoul Central District Prosecutors’ Office through an underground route that was off-limits to media.

While the first three questioning sessions were focused on asking Chung about the allegation that she fabricated an award for her daughter, who currently attends Pusan National University’s medical school, prosecutors said the fourth questioning was mainly about her investments in Co-Link Private Equity (PE). Among numerous suspicions surrounding PE, prosecutors believe Chung embezzled company funds under the disguise of a different person’s name.

Prosecutors are also known to have questioned Chung about her missing laptop. Her asset manager Kim Kyeong-rok, 38, a deputy director at Korea Investment & Securities, told prosecutors that he gave Chung a laptop last month at a hotel in Yeouido, western Seoul, but Chung was said to have denied this last weekend.

What materials were saved on the laptop was not immediately known.

Prosecutors are expected to summon Chung at least once more before deciding by this weekend, at the earliest, whether to ask a local court to detain her before her trial.

Apart from the detention warrant, court proceedings on the allegations that Chung faked an award for her daughter are scheduled to begin on Friday, when the Seoul Central District Court will open a hearing to confirm her plea and discuss her defense for the trial. By law, Chung is not obligated to appear.

On Sept. 6, just moments after Justice Minister Cho’s parliamentary confirmation hearing wrapped up, prosecutors indicted Chung for allegedly creating a Dongyang University presidential award for her daughter - without the knowledge of the president of Dongyang - and secretly placing his seal on the award. Prosecutors normally indict a suspect after they’ve been questioned, but with Chung’s case, they were much swifter because the statute of limitations for her charge was about to expire on Sept. 7.

As Chung was being questioned on Saturday, demonstrators supporting Justice Minister Cho and President Moon Jae-in held their third massive candlelight vigil nearby. It was not precisely known how many people showed up, as neither the organizers nor police officers announced estimates, but local media outlets reported that fewer people appeared to have participated in comparison to last week’s rally.

The organizers of the rally, a coalition of liberal civic groups, announced they would no longer organize the candlelight vigils - but revealed a set of measures for the prosecution, media, ruling Democratic Party (DP) and main opposition Liberty Korea Party (LKP) to comply with, saying if they don’t act on their “ultimatum,” they would resume their candlelight vigils in Seocho District and Gwanghwamun, central Seoul.

In the vicinity of the candlelight vigils, a smaller group of anti-Cho protesters gathered calling for Cho’s arrest and Moon’s impeachment. A group of college students separately gathered in Hyehwa-dong, central Seoul, protesting for the same.