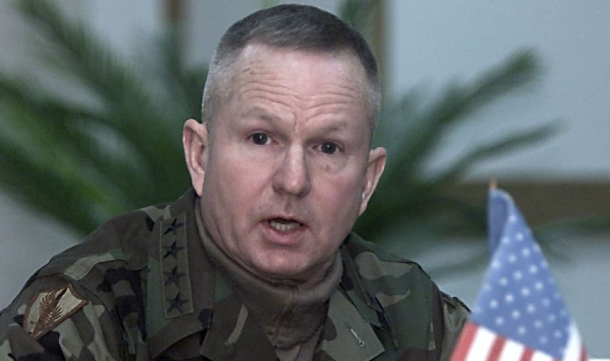 A former commander of the U.S. Forces Korea (USFK) on Friday expressed his opposition to the planned transfer of wartime operational control, or Opcon, from the United States to South Korea, citing significant threat stemming from North Korea’s nuclear weapons development.

Gen. Burwell B. Bell, a U.S. four-star general who commanded the USFK from 2006 to 2008, said in a written interview with a Korean correspondents club in the United States earlier this month that he opposed the wartime Opcon transfer based on recent assessments that Pyongyang has made great strides in its nuclear weapons program that has made a conventional weapons-based deterrence model obsolete.

Only the United States, he said, possessed the nuclear weapons and deployment capability to respond to the North Korean nuclear arsenal, and this capability can only be effectively planned and exercised in a wartime contingency if the U.S. command stands at the helm of the alliance. In terms of combat operations on the Korean Peninsula, the wartime Opcon transfer was unlikely to be realized, he added.

Bell presided over the USFK during the Roh Moo-hyun administration in South Korea, which actively pursued an agenda of taking back wartime Opcon from Washington. At the time, Bell expressed his support for the plan, which would make a four-star Korean general the head of the Combined Forces Command in Korea, in line with Washington’s official position at the time and Seoul’s desire to assert its national sovereignty.

In 2013, however, Bell published an open letter to the Korean government, military and citizens saying he no longer supported the Opcon transfer, based on the North’s “clear and expressed intent” to destroy South Korea with its nuclear weapons.

To contain this threat, Bell argued, “all efforts to execute the Opcon transfer should be halted,” since while South Korea’s military was “vastly superior to that of the North,” Pyongyang’s newly developed nuclear weapons would “put the South at a significant disadvantage on any future battlefield or in any future negotiations.”

Bell was not the only former U.S. military official to recently ring alarm bells on North Korea’s evolving nuclear program. Herbert R. McMaster, the Donald Trump administration’s second national security adviser from 2017 to 2018, said at a seminar in Washington on Thursday that premature sanctions relief should not be granted to Pyongyang and that doing so would be the “definition of insanity.”

The remark came only days after working-level discussions between the United States and North Korea resumed for the first time in seven months but subsequently fell apart over the course of a day.

McMaster claimed if Washington submitted to the North’s “provocation cycle” with its recurrent weapons tests, it would only enable Pyongyang to engage in “long, drawn-out negotiations, during which the North Koreans try to extort more money and payoffs.”

“And then ultimately what do you get? You get a weak agreement that locks in the status quo as the new normal. And then North Korea breaks that agreement right away,” he added.

Such skepticism on the North’s sincerity to commit to denuclearization appears buttressed by continued assessments in the U.S. government that Pyongyang is in possession of a large array of missiles capable of reaching U.S. allies in the Pacific.

A report by the U.S. Congressional Research Service updated this week labeled these short- and medium-range ballistic missiles as those “of most concern” to the United States, adding that the North may be in the process of building an intercontinental ballistic missile that could strike at targets on the continental United States with a nuclear warhead.