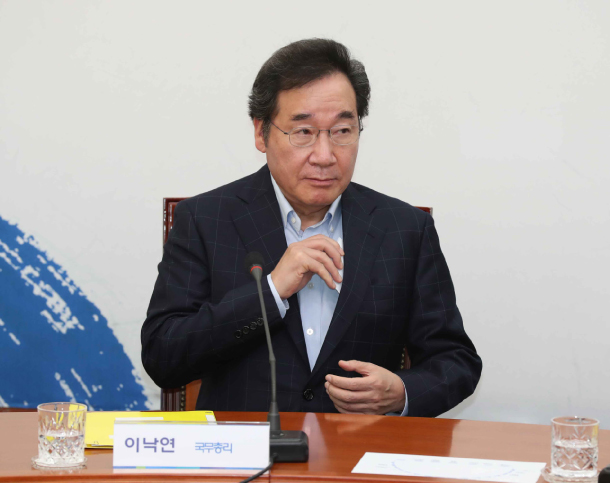 Prime Minister Lee Nak-yon will attend Japanese Emperor Naruhito’s enthronement ceremony on Oct. 22 in Tokyo, his office announced Sunday, in what could be a watershed moment to break the diplomatic standoff between the two countries.

Lee’s office said in a statement that the Korean prime minister will visit Japan from Oct. 22 to 24, during which he is scheduled to attend a banquet hosted by Japanese Prime Minister Shinzo Abe, meet “key figures” of Japan’s political and economic circles and talk with Korean immigrants living in Japan.

In light of the custom that a vice ministerial-level official normally accompanies the prime minister during his or her overseas trip, it’s speculated that Cho Sei-young, the first vice foreign minister will join Lee.

Whether or not Lee will meet Abe was not revealed by Lee’s office Sunday.

Sources with knowledge of Lee’s visit to Japan told the JoongAng Ilbo on the condition of anonymity that Lee could meet Abe on Oct. 23 before the banquet because that’s when other foreign dignitaries have planned their meetings with the Japanese prime minister. Yet even if a Lee-Abe meeting is arranged, the sources continued, there’s “a high chance” it would only last about 15 to 20 minutes.

The sources said Lee has told people around him several times that he sees the enthronement ceremony as “one of several important opportunities” to mend strained ties between Seoul and Tokyo. Abe has not held any one-on-one meetings with President Moon Jae-in or Lee since Japan announced export restrictions against Korea on July 1.

Lee’s office is also considering a meeting between Yoshihide Suga, Japan’s chief cabinet secretary, who’s considered the second-highest official in the Abe administration, according to the sources.

Last Friday, in response to a statement from Pyongyang’s Foreign Ministry that North Korea may resume intercontinental ballistic missile tests, Suga said that Tokyo, Washington and Seoul were “closely interacting with each other on several levels” and that Japan hopes to support the Korean Peninsula denuclearization process between Washington and Pyongyang - which could mean that Lee and Suga may reach some common ground in their talks on North Korea.

All eyes will be on Lee to see if he manages to make any breakthrough with Tokyo as the Nov. 22 deadline for the termination of the bilateral intelligence-sharing pact, the General Security of Military Information Agreement (Gsomia), nears.

Local media had wondered whether Moon would be visiting Japan for the emperor’s enthronement ceremony, but sources with information about the decision-making process said while Tokyo did send an invitation for the ceremony to the Korean Embassy in Japan - like it did for all the other countries it has diplomatic ties with - it did not specifically ask for Moon to attend. As Tokyo doesn’t appear to be so eager about Moon attending the ceremony, the sources said, the government thought it would make Moon look bad to travel to Japan for a 15-minute meeting with Abe.