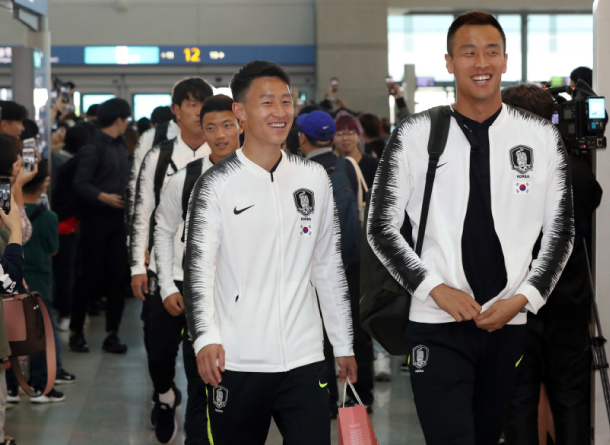 The South Korean national football team arrives at Incheon International Airport on Sunday to fly to Pyongyang through Beijing for a World Cup qualifying match against North Korea. [YONAHP]

The Korea Football Association will likely lose all communication with South Korea’s national football team from today through Wednesday while they stay in Pyongyang to play a qualifying match against the North Korean national football squad for the 2022 World Cup.

According to a local government official on Sunday, North Korea is ignoring the South’s repeated requests to send a cheerleading squad and for the national football team to fly directly from Incheon International Airport to Pyongyang via a 40-minute flight. Instead, the team will be arriving in Pyongyang after a much lengthier journey, passing through China. The team, which flew to Beijing on Sunday to apply for visas from the North Korean Embassy, is due to land in Pyongyang today.

More concerning is the situation regarding communication with the team, as it will be cut off from the moment they leave Beijing. “Cell phones brought into North Korea from other countries are not permitted roaming services in the North, and the act of taking cell phones into the North may be against North Korean sanctions,” a diplomatic source said Sunday. “The players’ cell phones and laptops are all planned to be kept in the Korean Embassy in Beijing and will be handed back when they return from Pyongyang.”

The team must also make sure any belongings they bring on the trip return with them. According to a government official, the United States allowed the team to bring necessities for the match, but the permission was subject to the condition that those necessities must return to the South.

“The two Koreas promised to expand social, cultural and sports exchanges in the Panmunjom Declaration and Pyongyang declaration of last year, but it seems like we are back in the past,” a government official playing a part in the national team’s visit to Pyongyang said. “If this kind of mood between the two Koreas persists, it will mean a red light for the decision of forming joint teams for the 2020 Tokyo Olympics and co-hosting the 2032 Olympics.”