Ko Jin-young, the world No. 1 in women’s golf from Korea, will headline an 80-player field at an upcoming LPGA Tour event in her native country. 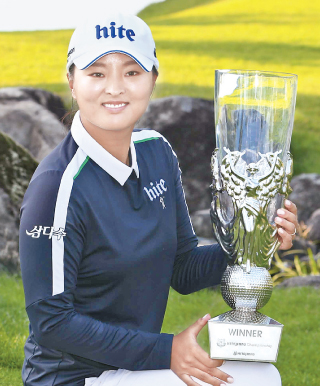 Ko Jin-young poses with a trophy after winning the Hite Jinro Championship at the Blue Heron Golf Club in Yeoju, Gyeonggi, on Sunday. [YONHAP]

Organizers of the inaugural BMW Ladies Championship on Monday announced the list of players to compete at the LPGA International Busan in Busan from Oct. 24-27.

Ko, who also leads the LPGA Tour in money, scoring average and the Player of the Year points in 2019, will be one of 50 LPGA members in the field, to be joined by 30 from the KLPGA Tour. Ko leads all players this year with four titles, including two majors.

The 72-hole stroke play tournament will have a total purse of $2 million, with $300,000 going to the champion.

The BMW Ladies Championship will replace the LPGA KEB Hana Bank Championship as the lone LPGA tournament on Korean soil during the Tour’s annual Asian Swing.

Also in the LPGA contingent will be rookie sensation Lee Jeong-eun. On the strength of her U.S. Women’s Open title, Lee clinched the Rookie of the Year Award last week with five tournaments still to go in 2019.

Ko is one of six multiple champions this season, and four others - Kim Sei-young and Hur Mi-jung of Korea, Brooke Henderson of Canada and Hannah Green of Australia - will be at the BMW Ladies Championship. Conspicuous by her absence will be Park Sung-hyun, world No. 2 and two-time winner this season.

Korean players have combined to win 13 of 27 tournaments this season. The single season record for most titles by the Korean contingent is 15, set in 2015 and matched in 2017.

Other fan favorites in action will be Minjee Lee of Australia and Lydia Ko of New Zealand, both of Korean descent.

In all, 36 of the top 40 players on the money list will be at the LPGA International Busan.

The field of 30 KLPGA stars features Choi Hye-jin, who has won four times this year and leads the domestic tour in money, scoring average and the Player of the Year points.

Jang Ha-na, who captured four LPGA titles before moving back home, will chase her first LPGA win since February 2017.

A non-LPGA member who wins the BMW Ladies Championship will become eligible for full-time LPGA playing privileges for next year. Ko Jin-young won the LPGA KEB Hana Bank Championship in 2017 to earn her Tour card and hasn’t looked back since.