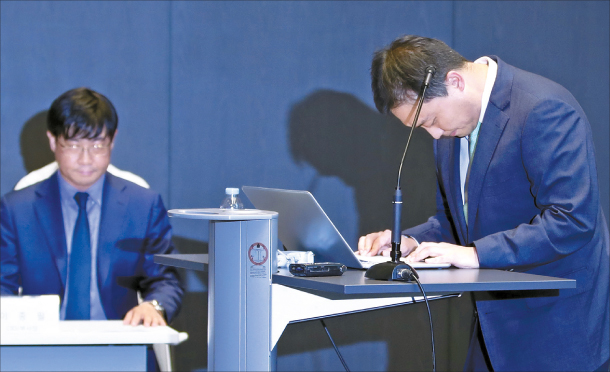 Lime Asset Management, Korea’s largest hedge fund, came under scrutiny on Monday after it delayed the repayment of around 850 billion won ($717 million) of investments, due primarily to a recent downturn on the stock markets and internal headwinds eroding investor trust.

The asset manager, which runs funds worth 4.9 trillion won, said Monday that it has postponed 846.6 billion won worth of redemption from three types of investments that have attracted a total of 1.3 trillion won.

Financial companies typically freeze their investment products when they find it hard to liquidate assets fast enough to match demand from investors who want their money back.

Won Jong-jun, head of Lime Asset Management, said that it could freeze up to 1.3 trillion won should the conditions worsen.

“We are making our best efforts to return our investors’ money,” Won said, “We apologize for not properly managing demands for withdrawal.”

As for the questions on a specific timeline for recovery, Lee Jong-pil, chief investment officer at Lime, expected 50 percent of funds to be made available for withdrawal in the first half of next year.

Lee cited a lack of liquidity and the poor performance of the Kosdaq for the reason behind the controversial move.

“As the Kosdaq market deteriorates this year, the return of the funds plunged, which also affected the company’s financial liquidity,” Won said.

The funds in question consist of private bonds and mezzanine financing like convertible bonds and bond warrants issued by Kosdaq-listed firms.

On top of the unfavorable market conditions, an investigation into Lime’s business practices also added to investor worries, which triggered the rise in redemption requests.

The Financial Supervisory Service launched a probe last week to look into allegations that Lime unfairly traded some of its fund products.

Lee declined to comment on the issue since the investigation is underway and will likely last for several months or even a year.

Local media outlets estimated that around 3,000 investors will be affected, but Lime said that the actual number might be lower.

“We don’t have the records on the number of affected investors, since it is sold through different channels,” Lee said.

“But given that many put in some 300 million won on average, the affected investors will be less than 3,000.”