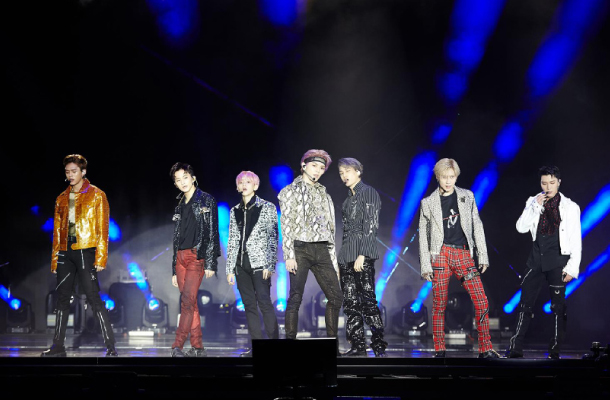 They may really be K-pop’s very own Avengers. SM Entertainment’s supergroup SuperM topped the Billboard 200 chart with its first-ever release, becoming the first K-pop group to go straight to No. 1 with a debut album.

“SuperM,” the debut EP of the seven-member boy band, topped the 200 albums chart on Sunday, with 168,000 equivalent album units. The update will be put on the website today.

Second place went to Summer Walker’s debut “Over It” with 134,000 equivalent album units.

Equivalent album units refer to a measurement that equals the purchase of one album copy to 10 song downloads and 1500 streams, according to the Recording Industry Association of America.

“SuperM’s handsome start was encouraged mightily by an array of permutations in which to purchase the album, which was likely very appealing to the group’s fans, since K-pop fans are often passionate about buying collectible physical packages of an album,” Billboard said.

SuperM made its official debut on Oct. 5 with a showcase in Los Angeles, with the hottest members from the SM family - Taemin of SHINee, Baekhyun and Kai of Exo, Taeyong and Mark of NCT 127 and Lucas and Ten from WayV.

The project was put together by SM head Lee Soo-man, in a joint effort with Capitol Music Group (CMG). Their EP was produced by Lee, while CMG lent their expertise in the U.S. market.

“It feels like a dream come true to sit on No. 1 of the Billboard 200 chart. We are so pleased to have achieved the result, and we thank everyone who made it possible. We promise to give you more super synergy in the future,” said a press release from the group.

SuperM will begin a tour of the United States and Canada in November, traveling around areas including Texas, Chicago, New York, Los Angeles, Seattle and Vancouver.