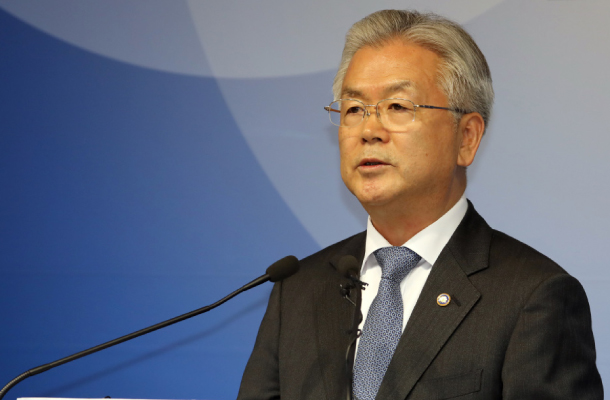 The Ministry of Culture, Sports and Tourism vows to better the Korean film industry by reaching out to both the producers and consumers, First Vice Minister Kim Yong-sam said Monday at a briefing at the Government Complex in Sejong.

The Culture Ministry announced its Korean Film Industry Development Plan on Monday at the 25th senior government meeting, pledging to expand their support for the Korean film industry in celebration of the 100th anniversary of Korean film, which falls on Oct. 27. The plan focuses on funding independent film producers and implementing a ceiling on big-budget films at cinemas, while helping underprivileged people gain better access to movies.

“The Korean film industry has undergone significant growth over the last 100 years,” said Kim. “It is the will of the Ministry of Culture, Sports and Tourism to take that meaningful year to give a detailed plan on policy changes. We have heeded the voice of the people in various fields, including people in the film industry.”

According to the ministry, the plan will involve three separate agendas: making a creator-oriented industry, fortifying the sustainable growth of the industry and allowing people to enjoy film in their everyday lives. The program will officially kick off next year, using the ministry’s 2020 budget.

The biggest changes will come from the ministry’s expanded funds, which will be given directly to producers and used in establishing a support center for indie and art movies. While direct investment in producers and directors was limited to 8 billion won ($6.7 million) as of this year, the ministry will spend 24 billion won next year, making the government and the Korean Film Council the prime investors in indie movies in Korea.

This will “give producers freedom, without having to tiptoe around their investors’ opinions,” Kim said.

The ministry will spend 2 billion won on a support center for indie and art movies, to support online distribution of smaller films. The online support system will give films a chance to be accessed by public institutions such as schools and government-funded cinemas. The total funding for producers will amount to 14 billion won.

“As of this year, over 1,000 independent films have been made, but less than 10 percent actually get screened at cinemas. It is our job to give more opportunities to such films,” Kim said.

The ministry will also push for a limit on the number of screens big-budget commercial movies take up at theatres, although the revision of the Promotion of the Motion Pictures and Video Products Act has not been passed at the National Assembly. As of now, 80 percent of movie screens are dominated by CJ’s CGV and Lotte Group’s Lotte Cinema.

For moviegoers, the film council will put into effect its Gachibom brand - a word that translates to “watching together” - a system they introduced in April. Gachibom allows audiences with impairments to watch movies without having to attend special screenings by using special goggles, monitors, headsets or earphones providing the necessary subtitles or auditory translations. The council will also expand the number of small-sized cinemas in suburban regions that will not only screen movies, but also hold other events such as talks with film directors.

“An important part of maintaining the industry is to secure an audience for the future,” said Oh Seok-geun, chairman of the Korean Film Council. “While the ministry focuses on supporting creators, we will focus on how people access movies. Right now, people living in smaller cities struggle to enjoy cinemas because there just aren’t facilities there. We will endeavor to alleviate such problems and allow people to watch films more easily.”

“We hope that this plan helps the Korean film industry to soar and evolve with the changing media environment around the globe,” Kim said.