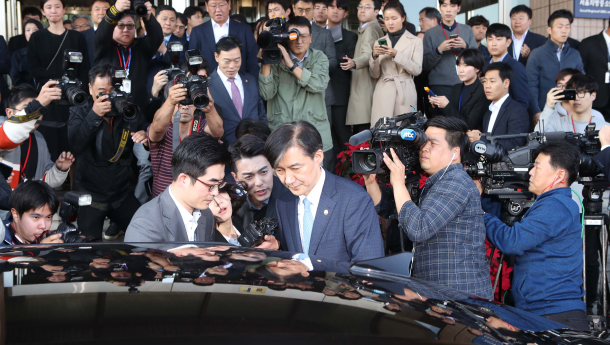 Outgoing Justice Minister Cho Kuk leaves the Justice Ministry office in Gwacheon, Gyeonggi, on Monday after he announces his intention to step down. [OH JONG-TAEK]

According to the Ministry of Justice, Cho informed the ministry around 1:30 p.m. Monday about his decision to resign and announced in a statement at 2 p.m., “Today, I surrender the justice minister title.”

The announcement was a particular surprise as Cho held a press briefing just a few hours earlier, at 11 a.m., to announce the Justice Ministry’s plan to reform the prosecution by shutting down special investigation departments nationwide, except for three key units in Seoul, Daegu and Gwangju. While Cho addressed the press in person to announce the reform measures, his resignation statement was distributed to media by the ministry without a press conference.

“I apologize to the people for the investigation into my family,” Cho said in the statement. “I spent day after day with the determination to do my best to reform the prosecution, even if I worked as justice minister for a few days. I believe my role has ended now.”

Ever since he was nominated in August, various suspicions surfaced about his family, including his wife’s dubious investment of family assets and academic irregularities involving his daughter. The family is being investigated on several fronts.

Cho was also the first justice minister in Korean history to have his home searched in a criminal investigation.

Cho’s appointment split the country. Competing rallies to support or denounce Cho and his signature campaign of prosecutorial reform clogged the streets of Seoul during recent weeks. The appointment also took a toll on the president: Moon’s approval rating hit record lows in the latest surveys, and analysts attributed the dramatic fall to the appointment of Cho.

“I concluded that I should no longer become a burden to the president and the administration due to my family’s trouble,” Cho said. “I think the time for my resignation has arrived in order to successfully complete the reform of the prosecution. I was only kindling to start a fire of prosecutorial reform. My role as the kindling ends now.”

Moon admitted Monday that his ambitious reform experiment had hit a snag and apologized to the public for having caused such a division in society. He postponed a weekly meeting with senior presidential secretaries by one hour to 3 p.m. and expressed his regrets in the opening remarks.

“I hoped for the reform of the prosecution through a fantastic union between Justice Minister Cho Kuk and Prosecutor General Yoon Seok-youl,” Moon said. “But it was just a dream. I offer a sincere apology for having caused conflict among the people.”

Moon said some progress was made, however, praising the reform plan announced by Cho earlier in the morning. The president, then, urged the National Assembly to approve relevant changes, referring to a pending bill aimed at creating a new investigative agency for senior public servants and two other bills designed to redistribute investigative powers between the prosecution and the police.

Moon also said it was meaningful that the prosecution itself was participating in the reform process and asked the Justice Ministry to complete all necessary procedures by the end of this month to enforce the changes.

“The role of the press is not a territory in which the government can intervene,” Moon said. “I urge the press to deeply think about their role and put efforts of self-reform to win the public’s trust.”

Moon did not address the issue of whether it was appropriate to nominate Cho as justice minister - and appoint him even in the face of major unresolved scandals that riled the public. When he formally appointed Cho last month, Moon said it was unfair to withdraw the nomination just based on scandals. “No clear criminal activity that Cho was liable for was confirmed,” Moon said at the time. “If I do not appoint him just because of suspicions, it will set a bad precedent.”

A Blue House source said Monday that Cho expressed his intention to step down after a high-level consultation on prosecutorial reform among the ruling party, administration and Blue House on Sunday. “It was Cho’s own decision,” the official said. The source also said it was painful for Moon to accept the resignation of his political and ideological partner.

In his statement Monday, Cho said he has done his best to weaken the powers of prosecutors ever since he joined the Moon Blue House and some tangible progress was made. “Despite all kinds of resistance, the reform of the prosecution has advanced this far because of the people’s support,” Cho said. “I beg the people to let go of me and support the president.”

Cho said there were many challenges remaining and that he would step down to allow a more forceful successor complete the job.

He also made an emotional appeal mentioning his family. “My family was covered all over with wounds, and I felt excruciating pain,” Cho said. “But I was able to hold on because of the people who support and root for prosecutorial reform.

“Now, I am going to put down everything to be with my family and comfort them as they go through the most painful time of their lives,” Cho said. “I can no longer ask them to endure more hardships.”

Cho’s wife, Chung Kyung-sim, was being interrogated by prosecutors when Cho released his resignation statement at 2 p.m. She asked for the interrogation to be stopped and was allowed to go home. It was Chung’s fifth questioning by the special investigation unit of the Seoul Central District Prosecutors’ Office.

Chung has already been indicted on charges of forging an academic award for her daughter, Cho Min, in order to help her get into medical school. Other suspicions about Cho Min’s undergraduate and graduate applications have been raised.

In addition to the forgery charge, Chung was being questioned about her role in investments in and the operations of a private equity fund.

The main opposition Liberty Korea Party (LKP), a main critic of Cho’s appointment, welcomed his resignation. “It is belated, but we all had expected this,” Rep. Na Kyung-won, floor leader of the LKP, said. “In the end, justice will prevail.”

She said the prosecution’s probe into Cho’s family must go on regardless of his resignation. She also demanded Moon to apologize for having appointed Cho against the people’s will.

Cho’s resignation was announced as the approval ratings of Moon and the ruling Democratic Party (DP) plummeted amid the political turmoil surrounding the justice minister.

According to the latest weekly poll released by Realmeter on Monday, Moon’s approval rating went down by 3 percentage points to hit 41.4 percent, the lowest since he took office. The figure was also lower than the 41.08 percent of the vote Moon won in the snap presidential election of May 2017.

The poll showed that Moon’s disapproval rating was 56.1 percent, up 3.8 percentage points from the previous week. The poll had a 95 percent confidence level, and the margin of error was plus or minus 2 percentage points.

The gap of support rates between the DP and the LKP was also the smallest ever since Moon took office, the poll showed, an alarming sign for the ruling party ahead of a general election next April.

The DP scored 35.3 percent while the LKP scored 34.4 percent, according to the poll. The 0.9 percentage point difference was within the margin of error.

The approval rating of the DP went down for the third consecutive week, while the LKP’s rating went up for the second week. The polling company analyzed that the confrontation between the liberals and the conservatives on the appointment of Cho benefited the LKP. The gap between the two parties’ approval ratings started to shrink in early October, when the conservatives started massive rallies in central Seoul to demand Cho’s resignation.