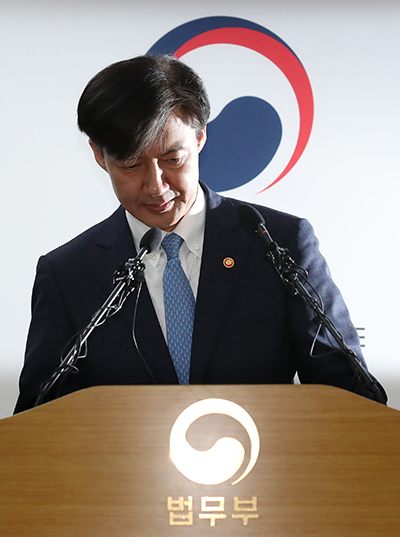 Scandal-plagued Justice Minister Cho Kuk said he will step down as investigations into his family’s suspected academic and financial crimes intensified.

According to the Ministry of Justice, Cho tendered his resignation to the ministry around 1:30 p.m. Monday and announced in a statement, “Today, I surrender the justice minister title.”

The resignation has to be accepted by President Moon Jae-in.

“I am extremely sorry to the people about the investigation into my family,” Cho said in the statement. “I spent day after day with the determination to do my best to reform the prosecution, even if I worked as justice minister for a few days. I believe my role has ended now.”

Ever since he was first nominated, various suspicions surfaced about his family, including his wife’s dubious investment of family assets and academic irregularities involving his daughter. The family is being investigated on several fronts.

“I am only kindling to start a fire of prosecutorial reform,” Cho said. “Despite all kinds of resistance, the reform of the prosecution has advanced this far because of the people’s support.”

Cho said there were many challenges remaining and that he would step down to allow a more forceful successor to complete the job.