Proposal by Biegun in Stockholm brushed off

Proposal by Biegun in Stockholm brushed off 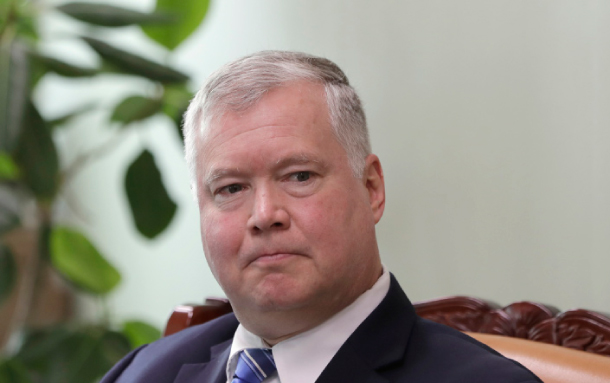 Washington’s chief nuclear negotiator Stephen Biegun proposed to North Korea earlier this month in Stockholm the setting up of a consultative body to regularize talks, according to multiple sources in Washington Sunday.

The sources told the JoongAng Ilbo that during talks with North Korea’s team in Sweden on Oct. 5, the U.S. State Department delegation proposed a mechanism to hold “systematic discussions” in order to advance the goals of the first North-U.S. summit in Singapore in June 2018.

Kim Myong-gil, North Korea’s chief nuclear negotiator and a former ambassador to Vietnam, rebuffed the offer by saying that “there is no need for negotiations for the sake of negotiations.”

A source in Washington said, “One of the creative ideas proposed by Biegun in Stockholm included creating a framework in which regular consultations could be held in order to ‘simultaneously and in parallel’ improve North-U.S. relations and establish a peace regime on the Korean Peninsula alongside complete denuclearization.”

According to this source, the proposed mechanism was to be modeled on the joint working group between South Korea and the United States launched in late 2018 to coordinate policy on North Korean denuclearization, sanctions implementation and inter-Korean cooperation. The Seoul-Washington working group is led by Biegun, the U.S. special representative for North Korea, and Lee Do-hoon, South Korea’s special representative for Korean Peninsula peace and security affairs.

The meeting between Biegun and Kim in Stockholm was the first working-level talk since the second North-U.S. summit in Hanoi, Vietnam, on Feb. 28 collapsed. North Korean leader Kim Jong-un and U.S. President Donald Trump had a third impromptu meeting at the demilitarized zone on June 30, but denuclearization negotiations continued to remain at an impasse.

“A regular consultative body is needed because prior consultations are necessary for a third North-U.S. summit,” said another source. “But beyond that, it also is taking into consideration that if a deal is made, it can become a body in order for each side to review and verify each other’s implementation.”

Immediately after the breakdown of talks in Stockholm, Kim Myong-gil expressed disappointment that Washington had failed to bring a “new calculation method.”

In the joint statement after the first North-U.S. summit in 2018, North Korean leader Kim and Trump committed to establishing new North Korea-U.S. relations, building a “lasting and stable peace regime” and the “complete denuclearization” of the Korean Peninsula.

The fourth point of the joint statement dealt with recovering and repatriating the remains of U.S. troops from the 1950-53 Korean War.

One source said that Biegun in Stockholm is said to have proposed in accordance to Articles 1 and 2 of the Singapore statement the setting up of North Korean and U.S. liaison offices, a declaration to end the Korean War and humanitarian aid, along with the freeze of nuclear materials and measures beyond the dismantling of North Korea’s Yongbyon nuclear complex.

This indicates that in the larger frame, there was not much difference from what was proposed during the failed Hanoi summit in the latest talks.

However, the U.S. team was said to have emphasized its position that it was “open to discussions” in response to Pyongyang’s demands that Washington take corresponding measures to the North’s halting of its intercontinental ballistic missile and nuclear tests and shutting down of the Punggye-ri nuclear test site.

Kim speaking to reporters in front of the North Korean Embassy in Stockholm on Oct. 5 was critical of Washington’s “inability to abandon its outdated position and attitude” and called the negotiations a waste of time.

It was noted that the atmosphere seems to have changed drastically between the morning and afternoon sessions at the Villa Elfvik Strand in Stockholm, as Kim was seen to have received instructions from Pyongyang during a lunch break.