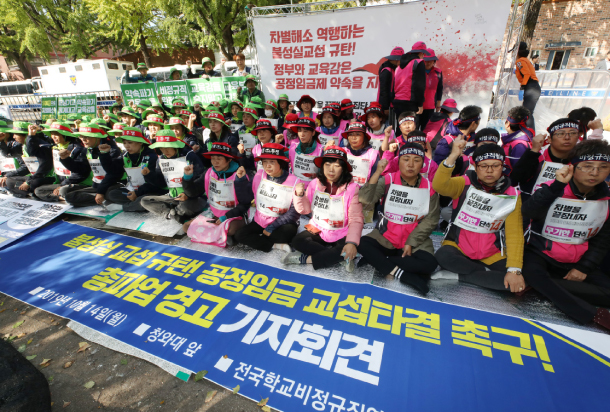 Members of a national union of non-permanent school workers stage a rally in Jongno District, central Seoul, on Monday to demand a pay raise and threaten to go on a nationwide strike this coming Thursday if they cannot reach an agreement with the government in the ongoing negotiations. [NEWS1]

Thousands of non-regular workers including cafeteria cooks at elementary, middle and high schools in Korea may go on a strike from Thursday if ongoing negotiations with the government for a pay raise are not resolved.

“We are trying to reach a point of compromise,” an official of the Ministry of Education told the JoongAng Ilbo Monday. “We have worked out our differences, more so than before.”

The Ministry of Education said that the ministry and a national union of non-permanent school workers began their closed-door negotiations on a pay raise on Monday morning.

It was the second round of negotiations after the two parties held one from last Thursday to Friday, which fell apart.

The ministry is said to have made an additional offer to the division Sunday night, and that the two parties were negotiating over the new offer Monday morning. If they cannot reach a deal by Wednesday, the union warned it will go on a strike from Thursday.

There are 142,000 non-regular workers at schools across the country, which include bus drivers, cafeteria cooks and janitors, and of them, 67 percent, or around 95,000, are members of the union. Such employees get no job security, and many are outsourced from contracting companies.

These members are demanding a 5.45 percent raise to their pay, a drop compared to the 6.24 percent hike the school workers demanded when they went on strike in July after negotiations with the ministry fell through.

The ministry, in the ongoing round of negotiations, is offering a 1.8 percent raise - the same it offered in July. The last time the negotiation fell through, around 2,500 contract workers at elementary, middle and high schools went on the strike from July 3 to 5. Around 2,800 schools had to stop serving lunch during those days.

Education offices in some provinces and municipalities distributed a variety of foodstuffs - mainly bread and milk - or asked parents to pack their children’s lunches. Some schools cut classes short.

“If the strike happens again, we will be at a loss for what to do regarding the school lunches,” said a 44-year-old woman surnamed Lee, who lives in Yangcheon District, western Seoul, with two children attending middle and high schools. “I don’t know why our children have to be the ones to suffer in this fight among grown-ups.”

In the last strike, school workers were also joining a larger, general strike by non-regular public sector employees, who argued that President Moon Jae-in was going back on the labor-friendly promises he made while running for president which included raising the minimum wage further, strictly enforcing shorter working hours, and putting many of the country’s public sector employees on permanent payrolls.