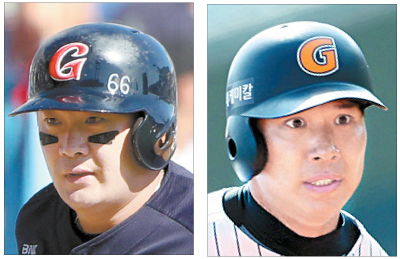 The Lotte Giants announced on Tuesday that Moon Kyu-hyun and Na Kyung-min will start their coaching careers.

In 2017, Moon signed a 2-year contract, with an option for another year, at 1 billion won ($843,000) with the Giants, but rather than taking the optional year, he came to an agreement with the club to retire. Although he will no longer be playing for the Giants, he will continue to work for the team.

Moon will start a new career as a Giants’ coach. His exact position has not been announced yet.

Moon made his KBO debut with the Giants in 2002, and throughout his 15 seasons with the club, he’s showed great strength in defense. Throughout 1,025 games, Moon had a 0.251 batting average with 26 home runs and 269 RBIs.

This season, Moon was only able to appear in 40 games due to a shoulder surgery and rehabilitation. He finished the 2019 season with a 0.250 batting average with 10 RBIs and 16 hits.

While Moon isn’t considered too young to retire, Na’s career move has come as quite a surprise. At only 27, Na will also become a coach. Since Na regularly appeared in the Giants’ games throughout the 2019 season, playing in 45 games, the decision came as a surprise.

After getting released, Na returned to Korea and underwent surgery. He finally joined the KBO with the Giants in 2016. More than his batting, Na showed off his impressive speed, and due to this, he was regularly substituted into the Giants’ games as a pinch runner.
In 45 games this season, Na had a 0.200 batting average with seven RBIs and 10 runs.

Under the Giants’ new general manager Sung Min-kyu, the Giants are going through a lot of changes. Before Moon and Na, the Giants released seven players.

Also on Oct. 11, the Giants appointed Larry Sutton as their new Futures League team manager. The team is still making coaching changes and is on the lookout for a new manager.

The overhaul is the result of the club’s poor performance this season. 2019 was one of the worst years in the team’s history, as they finished dead last with 48 wins, three draws and 93 losses.