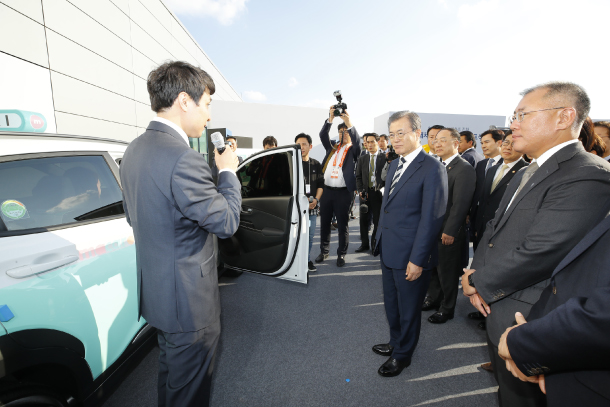 Korea wants to capture 10 percent of the world’s electric- and hydrogen-powered vehicle market and become the first country to commercialize fully self-driving vehicles within the next decade - with the help of private investment of 60 trillion won ($50.7 billion).

“Our goal is to become the leading country in competitiveness in future vehicles by 2030,” said Moon during a ceremony held at Hyundai Motor Group’s Namyang Technological Research Center in Gyeonggi.

Under the plan, the government expects the share of electric- and hydrogen-powered cars in new vehicles sales in the country to rise to 33 percent by 2030. Those vehicles accounted for only 2.6 percent of sales this year.

The government will prepare the infrastructure for the increase in eco-friendly cars.

“By installing 15,000 fast-charging stations for electric vehicles by 2025, they will become more convenient than gas stations,” explained Moon, who arrived at the ceremony in a Hyundai Motor hydrogen-powered Nexo. “We will also establish 660 hydrogen charging stations by 2030.”

The government also aims to commercialize fully autonomous vehicles on most of its roads by 2027, three years earlier than originally scheduled, which would make Korea the first country to commercialize the technology.

In order to achieve that deadline, the government will establish infrastructure and pass regulations to accommodate the vehicles on major roads by 2024.

“Efforts to ease regulations will be sped up,” Moon added. “We will designate a region to test self-driving vehicles to transport passengers and cargo next year.”

In order to achieve the broader industry transition, the government also announced that it will support raising the share of electronic auto component makers to over 20 percent of total auto parts supplied by 2030, compared to the current 4 percent.

It will offer over 2 trillion won in financial support for facilities investments and loans to help parts suppliers make the transition.

The ambitious 10-year plan includes some Jetsons-like ideas such as testing flying cars by 2025.

“As the seventh-largest car manufacturing country, a transition into future mobility is an opportunity for our auto industry to make strides for progress and strengthen the industry’s innovation,” said Industry Minister Sung Yun-mo during a briefing at the Central Government Complex in Seoul.

The government effort is aimed at helping local auto companies - Hyundai Motor Group, GM Korea, Renault Samsung Motors and SsangYong Motor - that have promised to spend a total of 60 trillion won on the industry transition in the next decade.

Most of that investment will come from Hyundai Motor Group. It announced it would be investing 41 trillion won through 2025 to develop future mobility technologies.

The group said it will transform its business away from manufacturing vehicles with that investment.

Chung explained that the auto group has already started such efforts by launching an open platform on Tuesday that will connect local auto-related start-ups and companies to share their vehicle data in order to develop new mobility services.

The announcement follows the automaker’s recent efforts to speed up development of new mobility platforms.

The group committed $2 billion last month to set up a joint venture with U.S.-based self-driving mobility company Aptiv and plans to develop a fully self-driving vehicle by 2024.

It is also planning to release 23 electric-powered vehicles, half of its planned new vehicles, by 2025.

The government has recently focused on a new “innovation-led growth” policy that supports business investment and the easing of regulations to revitalize a slowing economy.