Viva Republica, the fintech firm behind popular money transfer app Toss, applied for a license to open an internet-only bank on Tuesday, vowing to disrupt the banking sector.

The move came after the financial authorities rejected an earlier bid from Viva Republica to set up an internet-only bank in May, due primarily to a perceived lack of capacity to raise capital.

At the time, the decision was thought to be due to Shinhan Financial Group’s decision to exit the Toss-led consortium.

Viva Republica stressed that the participation of major banks in the latest bid will help ensure a stable capital stream. 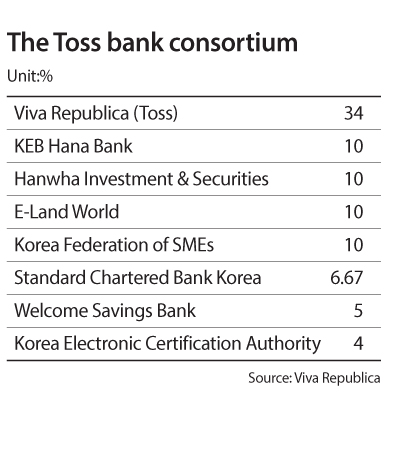 To carve out its own niche against existing internet-only banks, the new unit will target people traditionally underserved by existing banks - especially smaller retail merchants.

“We aim to focus on client groups often bypassed by established banks - those with mid-range credit scores and merchants for mom-and-pop stores,” said a spokesperson at Viva Republica.

In the ownership structure announced by the company, Viva Republica will become the top shareholder with a 34 percent stake in the new banking unit.

The second-largest shareholders are KEB Hana Bank, Hanwha Investment & Securities, E-Land World, a holdings unit of E-Land, and the Korea Federation of SMEs, a lobbying group for small- and medium-sized enterprises, with 10 percent shares each.

Standard Chartered will hold a 6.67 percent stake while Welcome Savings Bank will own 5 percent.

Viva Republica expects Welcome Savings Bank to play a critical role in providing lending for those with modest credit ratings and E-Land and the Korea Federation of SMEs to bring together the retail network.

Investment firms that have already backed Toss will also step into the new venture, including Altos Venture and Palo Alto, California-based Ribbit Capital, as minority shareholders, according to Viva Republica.

The firms were among the investors for the latest round of funding for Viva Republica led by Aspex Management, a Hong Kong-based investment manager, in August.

Kiwoom Securities bowed out of the race after the failure of its previous bid.