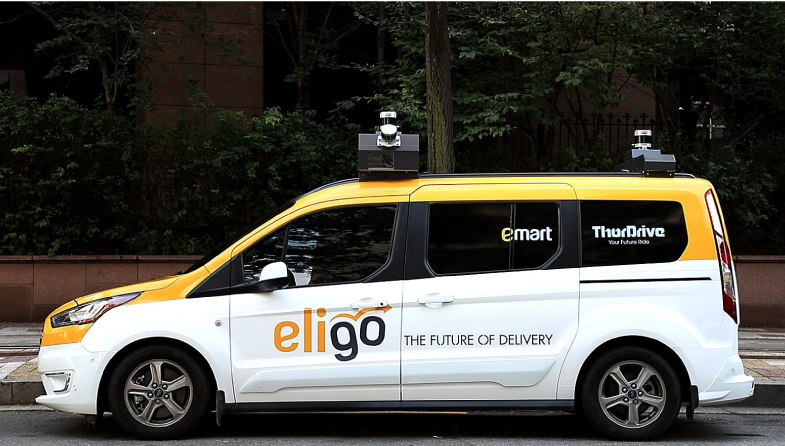 Emart’s self-driving delivery vehicle “eli-go” is parked next to a road Tuesday in Yeouido, western Seoul. The vehicle will be pilot tested for the next two weeks. [EMART]

The discount chain on Tuesday announced that it has started a two-week trial of “eli-go” in collaboration with local start-up ThorDrive.

Emart will use one self-driving vehicle made in collaboration with ThorDrive to fulfill same-day delivery orders make with kiosks installed at the Yeouido branch.

ThorDrive, a company made by a group of Seoul National University researchers that has developed a Level 4 self-driving taxi called SNUver, has been working with Emart since January this year to develop self-driving delivery services.

“This trial run is a pilot test for Emart, which has been leading the industry in applying technology to retail services, to diagnose the viability of future technologies,” an Emart spokesperson said in a statement.

Although the service uses a self-driving car, the trial run is still far from being completely autonomous, as two employees will sit in the autonomous vehicle and partly drive it during deliveries for safety.

The employees will drive the vehicle themselves when inside an apartment complex and off the main roads. Customers can receive delivered products either in their apartment lobby or at their doorstep.

To increase the number of customers at its offline stores with a focus on technology, Emart has been increasingly investing in developing unmanned retail services to be used at its branches. Last year, the discount chain unveiled its first Smart Cart robot that assists shoppers at supermarkets. The robot follows a designated shopper and is able to make transactions.