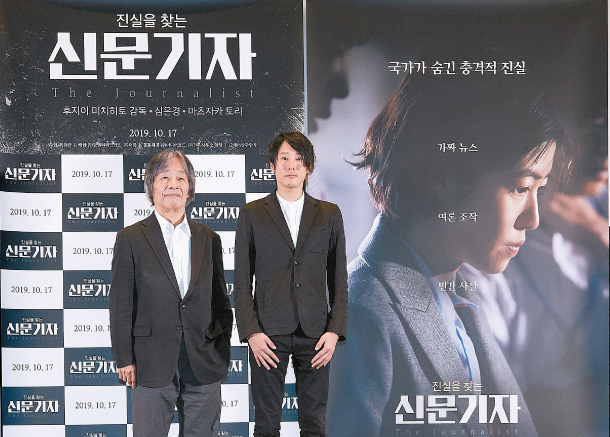 Producer of Japanese film “The Journalist” Mitsunobu Kawamura, left, and director Michihito Fujii pose for photos at a press conference held to promote their film at Apgujeong CGV in southern Seoul, on Tuesday. Actor Shim Eun-kyung, who plays the film’s lead role, did not attend the event. [THE COUP]

The Japanese film “The Journalist” has aroused interest in Korea for two reasons. The first is that Korean actor Shim Eun-kyung plays the film’s lead role, a U.S.-educated Japanese-Korean reporter trying to uncover government corruption. The other is that it is a rare Japanese film that openly criticizes the current administration - the film is loosely based on The Tokyo Shimbun reporter Isoko Mochizuki’s novel “Shinbun Kisha” (translated to “The Journalist”) and her reporting on a 2017 political scandal involving Japanese Prime Minister Shizo Abe and his wife, Akie Abe, regarding the building of Moritomo Gakuen, a private educational institute. The school operator used government connections to obtain state-owned land at a cheap price to build a private elementary school. Records of the prime minister and his wife being involved were removed from all related documents.

The film follows journalist Erika Yoshioka of The Toto Shinmun as she works to investigate a new medical school that the government is building as a cover to conduct illegal experiments. The government’s Cabinet Intelligence and Research Office is doing its best to cover its tracks and remain hidden from the public. She eventually learns that she is not alone: an elite bureaucrat Takumi Sugihara (played by Tori Matsuzaka) and other individuals help Yoshioka discover the truth about the manipulative influence the office has over public opinion and the media.

In reality, despite the multiple political scandals that could have overturned the current government over the years, the Japanese public remains largely ignorant about local politics in general, according to the film’s director Michihito Fujii, who attended a press conference for the film at Apgujeong CGV in southern Seoul on Tuesday morning.

“When the film was first released in Japan, younger audiences thought that the entire film was fiction. The majority of them said that they did not know that such a thing had actually happened,” the director said. “In this era where fake news and the role of the media and the information it provides aren’t clear, I wanted the film to provide a sense of direction to tell the media that they need to have the power to doubt the government’s ways.”

However, the director confided that even he was also from the generation that was indifferent to everyday politics. Moreover, Fujii added that he hardly reads about the news via newspapers, relying more on the Internet to get his news, which is why he turned down the opportunity to direct the film twice.

“Nevertheless, the person sitting next to me was very persistent,” Fujii said, referring to the producer Mitsunobu Kawamura. “Kawamura persuaded me that it was more important for me to direct the film because I didn’t know. He told me that the film had to be seen from the fresh perspective of the younger generation who is disinterested in current politics.” 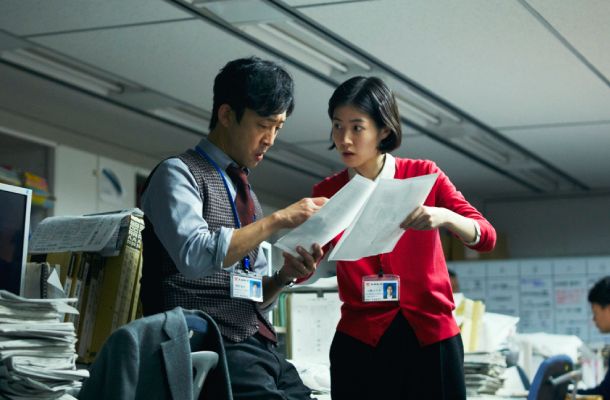 In a scene from the film, Erika Yoshioka, played by Shim Eun-kyung, receives feedback and discusses her article with her editor. [THE COUP]

Although newspapers are going out of style for younger people, the producer emphasized that newspapers remain the heart of media.

“In Japan, it’s [helpful to] the administration that the public is not reading newspapers,” Kawamura said. “I believe that the rates of newspaper sales and interest in politics are directly proportional and monitoring what is going on in politics is related to protecting democracy. So I hope that newspapers in the future [recognize their importance] and live up to the expectations as the crucial medium to provide [necessary] information.”

Meanwhile, the director used the film to probe deeper into the field of journalism.

“I interviewed several reporters for the film and found that there was an overarching belief: They all have faith in the power of words but simultaneously doubt it,” said Fujii. “There is a scene in the film where it shows the process of how the words written by a reporter are written, proofread, printed and passed on to the public. I think that is the essence of the film. While we read the articles, we also need to think about how we accept and form our own views upon the matter through the medium. That is what I gained from making the film.”

Although there was no direct pressure from the government during the filmmaking process, the film faced obstacles while promoting its release as it was only allowed to advertise in newspapers and via social media. “All broadcast media, even radio, refused [to promote our film],” the producer said. “That was a form of unspoken pressure that we received [from the government].”

However, both the director and the producer denied the rumor that Shim was cast as the last resort due to a series of refusals from local actors.

“We did not offer the role to anyone else except Shim,” said Kawamura. “I thought that Shim fit the role of Yoshioka perfectly with her intelligence and the various identities that she has formed [throughout her career.]”

The director also complimented Shim’s performance. “Shim told me that Korean films are usually produced slowly, in a minimum of three months,” said Fujii. “However, Japanese movies are filmed under a very tight schedule - mostly taking less than a month - which Shim adapted to very well, even with the language barrier, and [she] acted splendidly in Japanese.”

The duo expressed excitement about the film’s release in local theaters. “I think the Korean public is more interested in their politics than Japanese people,” the director noted “So I am curious to see how Korean audiences will respond to seeing the role of the media and especially an individuals’ struggle to stand up against the majority.”

Kawamura agreed with the director.

“Regardless of the sensitive diplomatic relationship between the two countries, I think the discussions about the role of the press that today’s generation direly needs to have transcend nationalities or the interests of governments - it’s a universal discussion that can be had anywhere in the world.”