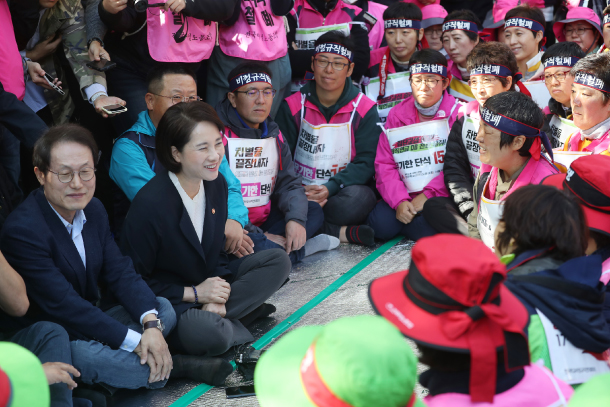 Cho Hee-yeon, superintendent of the Seoul Metropolitan Office of Education, left, and Yoo Eun-hae, both the deputy prime minister for society and the education minister, second from left, talk with members of a national union of non-permanent school workers on Tuesday in front of the Blue House, where the workers had been staging a hunger strike for over two weeks. The strike ended at the end of their discussion. [YONHAP]

Thousands of non-regular workers at schools including cafeteria cooks and bus drivers in Korea will not go on strike later this week after reaching a resolution on ongoing negotiations with the government for a pay raise.

“The two parties finally bridged the differences and reached a point of compromise on Monday night,” a representative of a national union of non-permanent school workers said during a press conference on Tuesday. “We urge the Ministry of Education to quickly implement the promises on related discussions including regular salary.”

The Ministry of Education and a national union of non-permanent school workers began their closed-door negotiations on a pay raise on Monday in Jongno District, central Seoul. The union, who at first demanded a 5.45 percent raise to their pay, accommodated the ministry’s demand and agreed on a 1.8 percent raise. They also agreed on a 2.8 percent hike in the rate of base salary and a 40,000 won ($34) increase to their monthly transportation fees for next year.

The union leaders’ hunger strike, which had lasted for 15 days in front of the Blue House demanding abolition of discrimination between regular and non-regular workers and regular salary, was officially stopped on Tuesday after the two parties reached the tentative agreement.

There are 142,000 non-regular workers at schools across the country, which include cafeteria cooks and bus drivers. Of them, 67 percent, or around 95,000, are members of the union. The last time the negotiation fell through in July, around 22,000 workers went on strike and about 2,800 schools had to stop serving lunch during those days.

Ahead of the national union’s press conference, Deputy Prime Minister for Society and Education Minister Yoo Eun-hae and Superintendent of the Seoul Metropolitan Office of Education Cho Hee-yeon visited the people who were on the hunger strike Tuesday. Education Minister Yoo said, “We will form a pan-governmental committee for government, labor and management regarding public officials and further discuss the salary system.”

A signing ceremony regarding the two parties’ agreement, which will be organized by Gwangju Metropolitan Office of Education, has been scheduled for early next week.