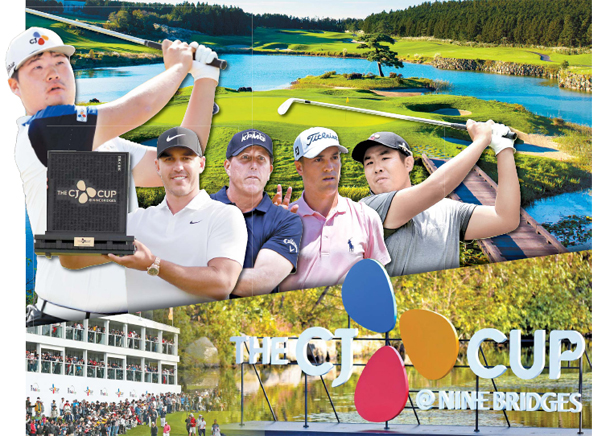 The third edition of the CJ CUP @ NINE BRIDGES finally kicks off at the Club at Nine Bridges in Jeju Island today.

The CJ Cup, the only PGA Tour event in Korea, will feature 78 players competing for a total purse of $9.75 million. Of the total purse, the winner will take home about $1.75 million.

The CJ Cup is only the sixth event on the 2019-20 PGA Tour. This year may be the biggest edition of the cup yet, not only because of the huge winning purse, but also the list of players competing this year.

Looking at the 78-person field, the requirements for qualified players mainly depend on the points standing. On the PGA Tour, the top 60 players on the FedExCup point standing were given exemptions. Since the tournament is hosted in Korea, five players qualified through the KPGA Tour.

The top three players on the KPGA Tour’s Genesis point standing as of Sunday - which is also the Player of the Year standing - qualified, while the winner of the 2018 Genesis Championship and the 62nd KPGA Championship, which was held in June this year, qualified.

The three highest-ranked Korean golfers on the Official World Golf Ranking also automatically qualify, as does one Korean amateur and another player with a sponsor exemption.

Quite a number of major champions and former world No. 1 players will visit Jeju Island for the tournament.

The CJ Cup will run from today through Sunday. The biggest perk of this tournament is that none of the 78 players will go home empty-handed, as there’s no cut after the second round.

As the tournament’s main sponsor is CJ, a lot of Team CJ players will be visible throughout the weekend. Among the CJ sponsored players, reigning PGA Rookie of the Year Im Sung-jae will lead the pack.

Im enters the tournament on the top of his game. Just last week he picked up his first-ever win on the KPGA Tour by winning the Genesis Championship. It was quite an impressive win as he overcame a seven-shot deficit on the final day.

This year, Im enters the tournament as the highest-ranked Korean golfer, at 44, in the Official World Golf Ranking. If he takes the win this year, it’ll be his first in the PGA.

“I think a lot of fans will come out to cheer, and I want to play well but I think I’ll set my goal as a top-10 finish,” Im said at a press conference on Tuesday.

Im will play his first two rounds with Gary Woodland of the United States and Jason Day of Australia. He will tee off his first round at 9:20 a.m. on the first hole.

Followed by Im, An Byeong-hun enters this weekend as the second highest-ranked Korean golfer, at No. 48. An has been a regular at the Jeju tournament, as he’s been competing since the inaugural event.

Just like Im, An also hasn’t won a tournament on the PGA Tour. Last season, An recorded three top 10 finishes and this season, he is off to another solid start by finishing third at the Sanderson Farms Championship.

An will play his first two rounds with Abraham Ancer of Mexico and Moon Kyong-jun of Korea. He will start his first round at 9:50 a.m. today, starting from the first hole.

Along with the CJ players, the tournament’s defending champions will also return to Jeju this weekend.

The inaugural champion Justin Thomas of the United States will be returning for the third time this year. By finishing his 2018-19 season with a win at the BMW Championship and tied for third at the Tour Championship, Thomas is once again off to a solid start to his 2019-20 season as he finished fourth at the Safeway Open.

As the inaugural champion, Thomas hoped to defend the title last year, but instead finished tied for 36th.

Thomas will play his first two rounds with Phil Mickelson of the United States and Marc Leishman of Australia. Thomas’ group will start its first round from the 10th hole, at 8:20 a.m.

Current World No. 1 Brooks Koepka of the United States will be also be playing this weekend. In addition to being the world No. 1, Koepka is also the defending champion at the CJ Cup.

Last year, Koepka shot eight under par, 64, on the final day to win the tournament four shots ahead of Woodland. The win carried Koepka to the No. 1 spot in the world ranking for the first time.

Although he missed the top stop during the 2018-19 season, he quickly regained it by defending his major title at the PGA Championship in May. Since then, Koepka’s been maintaining the top spot in the Official World Golf Ranking. Koepka picked up two wins last season as he won the WGC-FedEx St. Jude Invitational in July.

But Koepka didn’t have the best start to his 2019-20 season, as he missed the cut at the Shriners Hospitals for Children Open in the first week of October.

Koepka will play his first two rounds with Hideki Matsuyama of Japan and Kim Si-woo of Korea. His group will start the first round from the first hole, starting at 9:30 a.m.

This year, Koepka’s younger brother Chase Koepka will also be competing at the tournament.

But it isn’t the young players that have been in the spotlight this week. This year, Mickelson will join the tournament for the first time.

Whether he wins or not, Mickelson’s appearance this weekend is expected to bring more fans out on the course.

Having joined the PGA Tour in 1992, Mickelson, who is known as Lefty, has picked up 44 wins on the PGA Tour throughout his career. Of his 44 victories, five were at major tournaments. Last season, Mickelson’s 44th victory was at the AT&T Pebble Beach Pro-Am.

This season, Mickelson got off to a quick start to the season as he has already played two tournaments, but he didn’t have the best start as he missed the cut at his first tournament, the Safeway Open, and finished 61st at the Shriners Hospitals for Children Open two weeks ago.