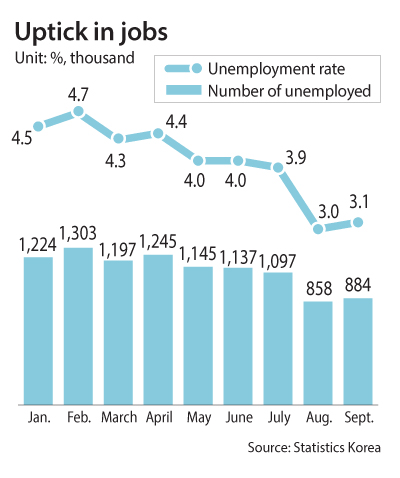 Korea posted its highest employment rate in 30 years in September as it continued a recent streak of strong job numbers - with many jobs going to older Koreans.

Statistics Korea reported Wednesday that last month’s employment rate for the population aged between 15 and 64 years old was 67.1 percent, the highest for that month since data began to be recorded in its current form in 1989.

Much of the gains in September, as has been the case throughout this year, was due to jobs for elderly people.

The government aims to create 600,000 jobs for older Koreans this year.

Most such jobs under government programs consist of short part-time work, which led to an increase of 737,000, or 16.3 percent, in the number of employed who work less than 36 hours a week to 5.25 million last month.

“For jobs with less than 36 hours […], increases in those created by government spending can be cited as one of the reasons,” said Jeong Dong-wook, the employment statistics division director for Statistics Korea. “That has also led to increases in the number of employed for the over-59 age group.”

While losses in the 40s age group were partially attributable to changes in Korea’s demographics - a fast-aging population - the job losses in that group last month actually outpaced the decrease in the overall number of people in their 40s, which dropped by 131,000.

The statistics agency blamed the losses in manufacturing jobs to a recent trade slowdown evidenced by falling exports.

Korea recorded a 10th consecutive month in on-year declines in exports last month, largely due to the ongoing trade conflict between the United States and China.