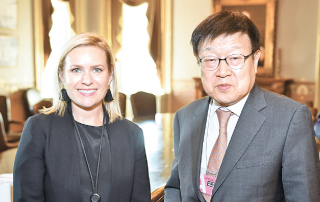 Kim Young-ju, chairman of the Korea International Trade Association, visited the United States on an economic mission to improve the trade and investment environment for Korean companies in the United States.

Kim met with Kelly Ann Shaw, deputy assistant to U.S. President Donald Trump for international economic affairs and deputy director of the National Economic Council in Washington, on Tuesday and asked the United States to exempt Korea from tariffs on imported automobiles based on Section 232 of the Trade Expansion Act.

“Korea has been investing more than $10 billion into the United States, and Korean conglomerates are contributing to the U.S. economy and job creation by establishing factories,” Kim told Shaw. “To increase investments, the United States should exempt Korea from auto tariffs and not overuse the country’s trade remedies.”

Kim added that Korean steelmakers have been struggling to make additional investments in the United States due to import tariffs imposed on them including anti-dumping tariffs.

“We hope the United States operates its [trade remedies] at a predictable and reasonable level,” Kim said.

Kim also asked the United States to play a mediating role in the recent trade spat between Seoul and Tokyo, citing concerns that import restrictions imposed by Japan on key industrial materials for semiconductors and displays could negatively impact the global supply chain in affected industries.

Shaw replied that the United States understands that countries like Korea have become unexpected victims of Washington’s recent efforts to create a fair trade environment, which includes trade restrictions on China. She promised to operate trade remedies in a more fair and transparent manner while thanking Korean companies for the active investment.

On Tuesday, Kim also had a luncheon meeting with trade advisers including Terry Miller, director of the Center for International Trade and Economics of the Heritage Foundation, and Charles Boustany, a former Republican House member who closely tracks trade issues, to share ideas on how Korea should respond to spreading trade protectionism and the ongoing trade spat with Japan.

Kim was accompanied by representatives from seven Korean companies and a local business association for the display industry.