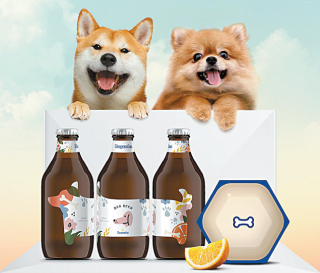 Solo drinkers can now share an ice-cold Hoegaarden with the dog. [ORIENTAL BREWERY]

Being a very good boy all day long can be tiring, so why not get that pooch a pint - or at least an ice-cold bottle of Hoegaarden’s new dog beer.

Surprisingly, the Belgium beer maker isn’t actually expecting Fido to head to the convenience store and pick up a few cold ones - the new dog beer is really targeting Korea’s solo drinkers who are increasingly opting for a quiet night in rather than a big night out with friends or co-workers.

Partnering with dog food maker Treat Table, Hoegaarden created the dog beer so that well-behaved pooches can join their owners at the metaphorical bar.

The non-alcoholic beer is actually a vitamin drink. It contains eight different vitamins, from vitamin A to B2, C and E. The company said it added a citrus flavor, sweet potato, corn and barley to the drink.

To celebrate the launch, Hoegaarden is hosting an offline event for dogs and their owners at the Sevit Islets in southern Seoul. The event will run from Friday through Sunday.

“We have introduced dog beer for Hoegaarden drinkers to be able to enjoy the relaxing experience of drinking with their furry friends,” said a spokesperson from Oriental Brewery, which distributes Hoegaarden in Korea. “We hope people will make good memories.”