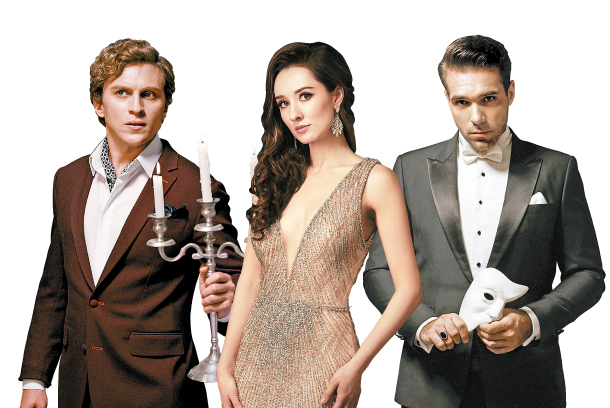 When Koreans hear that the original production of the musical “Phantom of the Opera” is coming to town, they find their heart suddenly beating faster in excitement. It did for the hotel clerk - a young Korean man in his 30s - at the Westin Chosun Hotel in central Seoul, who was checking Rainer Fried in, the associate director of the “Phantom of the Opera” last week after he realized that the show was coming to Korea for the first time in seven years.

“It’s like Koreans have had an ongoing and continuing love affair with ‘Phantom,’ and in between they have flings with other shows, but always come back to ‘Phantom,’” said Fried, chuckling. “It’s like coming back to their ex because they know that this is the best. That is why we are unable to get away from each other. We might as well get married now.”

The original production of the “Phantom of the Opera,” which premiered in Korea seven years ago, is making a comeback with some new cast members, premiering in Busan first on Dec. 13 and arriving at Seoul’s Blue Square next March. It will then move down to Daegu in July for about two months. To announce that the longest running show on Broadway is coming back to tour three different cities in Korea for nine months starting in December, the show’s three lead actors - Jonathan Roxmouth playing the Phantom of the Opera, Claire Lyon playing Christine Daae and Matt Leisy playing Raoul - as well as Associate Director Fried and Musical Director David Andrews Rogers visited Seoul for a press conference on Oct. 10 and a showcase held for fans at Everland in Yongin, Gyeonggi, the following day.

Lyon is familiar to Korean musical fans as she played Christine in 2012 when “Phantom of the Opera” premiered in Seoul to celebrate the show’s 25th anniversary. As an experienced performer in Korea, she told her colleagues that “Koreans know how to do musical theater,” and that Korea has “such an educated audience,” intensifying her co-stars’ excitement.

“I’ve been looking forward to coming to Korea for a very, very long time,” said Roxmouth. “One of my other colleagues back home who also experienced Korea said to me that performing in Korea will change the way I think about theater, so I am very much looking forward to [it].”

Roxmouth, who has played at least six different lead roles in Andrew Lloyd Webber’s musicals, describes “The Phantom of the Opera” as a show that’s “genuine.”

“It’s very rare to see a show of this scale that presents a genuine acting challenge that isn’t rooted in stage tricks,” he said. “It’s about what the actor can do to expose vulnerabilities as opposed to relying on sets and things that don’t involve storytelling. It’s very important for the actor to get the balance right in telling the story as well as giving the audience their money’s worth in what they see and what they feel. But if the actor isn’t the main conduit of the truth of the story, it’s not the great piece of theater. ‘Phantom’ gets all of that right.”

Playing Phantom may be intimidating for some actors because they are inevitably compared to Michael Crawford, the original star of the Phantom. “If you can be sure what you are doing is something that only you can do, then that is what you should be doing,” said Roxmouth. “There are certain moments in the show that you realize they are written that way for the Phantom because of Michael Crawford. But that’s it. The writing is strong enough to withstand anybody doing that role and the story will come out exactly the same.”

Since it’s coming to Korea for the second time, will there be any changes?

“What’s really miraculous about this show is that it opened in London in 1986 and moved to Broadway, but it actually never changed,” he said. “That rarely happens with any show that opens. Usually, you have an opening night, you take it to West End, and then to Broadway, for example, and usually there are a lot of changes. That’s a good thing too. I’m not saying one thing is better than the other. But the special thing about ‘The Phantom of the Opera’ was that it actually never really changed. They just got it right from the start.”

Fried says he almost feels like the show “resists change” - whenever the creative team tried to make slight changes, “it [is] as if the show is telling us ‘leave me alone.’”

“Usually the show is right, because it just works better when it’s left as it is,” he added.

That is why the actors and the creative team believe the show has become the longest-running musical on Broadway, and can be enjoyed by all generations.
“It’s like a family heirloom for many people,” said Roxmouth. “It’s passed down and our story is no different to my grandfather’s.”

Leisy believes the reason why the musical “can stay relevant and in the hearts of so many fans for over 30 years is because it speaks so many universal themes like love, loss, betrayal, jealousy - which human beings can connect to.”

“There’s something for everyone,” he said, “wherever you are in your life. It just speaks to everybody and it’s a great treat to be a part of something that is so epic.”

One thing is brand new though, says Fried, and that is the set. “So basically, it’s a new set [that looks] exactly like the old set,” he said. “It’s technically reworked so it can now, finally, after all these years, travel to cities that we were never able to go to before because of technical requirements that were too complex for those theaters.”

“So what the audience in Korea will see is exactly what they’ll want to see in ‘The Phantom of the Opera.’”

Tickets for the Busan show at Busan Dream Theatre went on sale on Oct. 16, while tickets for the Seoul show go on sale today. The Seoul run will begin on March 14 and end on June 26 at the Blue Square in central Seoul. Tickets range from 60,000 won ($50.50) to 170,000 won. For more information, visit www.phantomoftheopera.co.kr