Kim and his steed visit Paektu

Kim and his steed visit Paektu 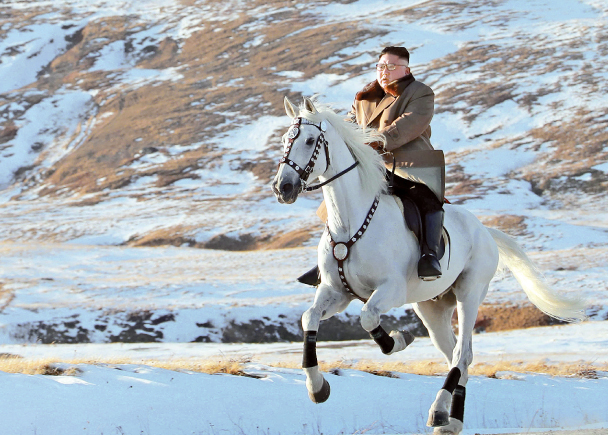 North Korean leader Kim Jong-un rides a white horse up a snow-covered Mount Paektu after inspecting construction sites at the foot of the mountain in a photo released by the state-run Korean Central News Agency Wednesday. [YONHAP]

The official Korean Central News Agency (KCNA) published photos of Kim mounted on a white steed, with the snowy peaks of Mount Paektu in the background, hailing his visit as “a great event of weighty importance in the history of the Korean revolution.”

Kim’s visit to the mountain - a symbolic location that North Korea claims is the birthplace of Kim Jong-un’s father and the regime’s former dictator, Kim Jong-il - could herald a major decision in the next few weeks as a stalemate drags on in Pyongyang’s denuclearization negotiations with Washington.

The English-language KCNA report alluded to such a possibility, saying “all the officials accompanying [Kim] were convinced with overflowing emotion and joy that there will be a great operation to strike the world with wonder again.”

Kim also took the opportunity to inspect the township in Samjiyon County, Ryanggang Province, where the mountain is located, providing field guidance to construction sites and factories in the area, another KCNA report read.

During these inspections, the report read, Kim directly condemned the “U.S.-led anti-DPRK hostile forces” that he said were trying to “strangle us with the chain of pressure” but stressed that such trials have only emboldened his people to survive.

“That no matter what persistent efforts the enemy make, we can live well with our own efforts and pave the avenue to development and prosperity in our own way is a review of the year 2019 that has brought about a higher leap forward, miracles and feats despite trials and difficulties,” Kim said with conviction, according to the report.

The dictator’s high profile visits to Mount Paektu in the past usually preceded key policy decisions, like in February 2013, when he discussed the country’s governance with key officials before embarking on a political purge - and eventual execution - of his uncle, Jang Song-thaek.

More recently, Kim returned to the mountain in December 2017, just months before he resumed diplomatic engagements with South Korea about the Winter Olympics hosted by the South. During the third inter-Korean summit last year, Kim and South Korean President Moon Jae-in visited Mount Paektu together.

South Korean analysts noted this most recent visit coincides with what could be a time of great uncertainty for North Korea as a result of the breakdown of working-level talks with the United States earlier this month over the scope of denuclearization efforts.

While Pyongyang left open room for a positive response from Washington by the end of this year, the regime’s top nuclear envoy, Kim Myong-gil, and the country’s Foreign Ministry also hinted that the North could withdraw its self-imposed moratorium on nuclear weapons and intercontinental ballistic missile tests if the United States does not relent.