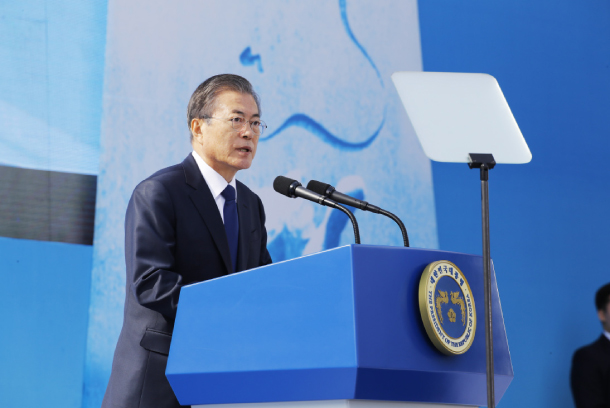 President Moon Jae-in said Wednesday that “all powerful authorities” in the country must remember that they serve the people.

Moon was speaking at a commemoration of the 40th anniversary of the Busan-Masan Democratic Protests, the first time the government hosted a ceremony marking the uprising against the dictatorial rule of Park Chung Hee. The event took place at Kyungnam University in Changwon, South Gyeongsang.

Moon’s remarks were an obvious reference to his attempts to bring reforms to the criminal justice system and the prosecutorial system, which hit a major speed bump with the resignation of his controversial former Justice Minister Cho Kuk on Monday.

Listing Korea’s major democratic protests from the April 19 Revolution in 1960 against the Syngman Rhee regime to the 2016 candlelight protests that ousted his predecessor Park Geun-hye and brought him to power, Moon said democracy was here to stay.

“Now, the people are demanding more democracy and better democracy,” Moon said. “All powerful authorities must bear in mind the basic notion of democracy: that they exist for the people, not for their own organizations.”

It was evident that Moon’s message was directed at the prosecution. In a meeting with senior secretaries on Monday, shortly after Cho resigned as justice minister, Moon made a similar remark. “We must establish the culture in the prosecution that it will put the people at the center of its operations, not its own organization,” Moon said at the time.

Later in the afternoon, Moon met at the Blue House with Vice Minister of Justice Kim Oh-soo and Lee Seong-yun, a senior prosecutor named to head the Criminal Affairs Bureau of the ministry in July, and expressed his determination to push forward his reform campaign.

Moon said the Justice Ministry must strengthen its oversight over the prosecution by using its audit and inspection authority. He asked the two officials to prepare a plan accordingly.

Earlier in the morning, the Justice Ministry appointed Han Dong-soo, a partner of Yulchon LLC, one of the country’s largest law firms, as head of the audit and inspection headquarters of the Supreme Prosecutors’ Office. Han, a lawyer who ended his career as a judge in 2014, will be in charge of auditing and inspecting prosecutors.

Han was a member of the Society for Research on Our Law, a group of liberal judges. Sources said Cho recommended Moon to appoint Han, not a senior prosecutor, to the post.

Since the job was offered to candidates from both inside and outside the prosecution starting in 2008, Han is the third former judge to serve in the post.

Moon also urged the cabinet to approve reform measures announced by Cho on the day of his resignation, before the end of this month. Moon advised Kim to lead the Justice Ministry as if he was the acting minister because it will take a long time to find Cho’s successor.

In his speech earlier in the morning at the commemoration ceremony, Moon praised the Korean people’s way of expressing their opinions in street protests. “Through democracy, many people were able to find their own voices,” Moon said. “Diversity in democracy will expand as they express their voices, and they are also realizing that other people’s voices are as important as theirs.”

Moon also offered an apology to protesters of the past whose rights were violated. Mass protests took place from Oct. 16 to 20 in 1979 in Busan and Masan, now a part of Changwon, in the southern part of the country, calling for an end to the Park regime.

Park declared martial law on Oct. 18, 1979 and mobilized the military to suppress the protesters on Oct. 20. The government managed to quell the protests, but Park was assassinated in less than a week on Oct. 26, 1979.

In a cabinet meeting last month, the Moon administration designated the anniversary of the October 1979 protests a national memorial day and gave them a formal name, the Busan-Masan Democratic Protests. Yu Chi-jun, a 51-year-old man killed during the protests, was recognized officially as a victim of the Park regime’s violence.

“It’s been too long that the state has failed to pay attention to the suffering,” Moon said in the speech. “I offer my condolences to the victim’s family, and I, as the president, also offer a deep apology to all other victims whose human rights were violated by cruelty of the dictatorship.”

Moon said the government will put more efforts into a fact-finding mission to reveal what happened during the 1979 protests, restore the honor of the victims and compensate them. “I will clearly lay bare the responsibilities of the perpetrators of state-led violence,” Moon said. “This is not to punish them. This is to promote justice in history.”

In his speech, Moon also issued a message intended to improve the plummeting popularity of the ruling Democratic Party (DP) in Busan and South Gyeongsang ahead of the April general elections.

“Residents of Changwon, Busan and South Gyeongsang have pioneered not only political democratization, but also initiatives to end dictatorships’ brutal labor controls, unequal growth based on low wages and the favoritism in our economic structure to benefit conglomerates,” Moon said.

“The government will soon create a special organization devoted to support Busan’s bid to win the 2030 World Expo,” Moon said.

He also promised that the central government will do its best to successfully host the Korea-Association of Southeast Asian Nations Summit and Korea-Mekong Summit in Busan, schedule to take place in 40 days.

It was Moon’s 11th visit to the Busan-South Gyeongsang region this year. According to a Gallup Korea poll released last Friday, the ruling DP’s approval rating was 29 percent, down by 7 percentage points from the previous week. In the same poll, the opposition Liberty Korea Party scored 35 percent, up by 12 percentage points.