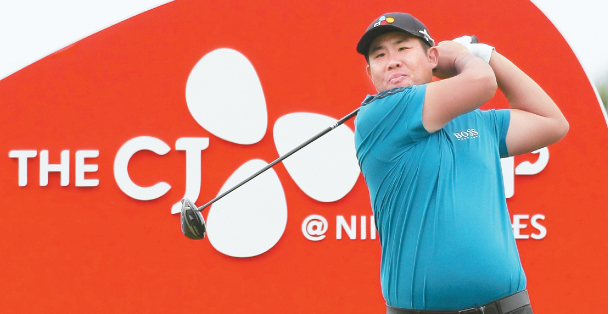 An Byeong-hun of Korea tees off at the 9th hole during the first round of the CJ CUP @ NINE BRIDGES on Jeju Island on Thursday. An ended the first round at eight under par, 64, to take a one-shot lead over Joaquin Niemann of Chile. [JNA GOLF]

JEJU ISLAND - An Byeong-hun took a sole lead after the first round of the CJ CUP @ NINE BRIDGES at the Club at Nine Bridges in Jeju on Thursday.

Playing in unusually calm weather for the typically windy island, An shot a bogey-free round of eight under par, 64, to take a one-shot lead ahead of Joaquin Niemann of Chile.

An got off to a quick start with a birdie on the par-3 second. After another on the par-4 fourth, An added back-to-back birdies on the sixth and seventh holes to shoot four under par in his front nine.

Then, he quickly made his way up the leaderboard in the back nine. Three straight birdies from the par-4 11th to par-3 13th quickly allowed An to take the lead. However, Niemann tied for first as he finished his first round with back-to-back birdies on the 17th and 18th hole. 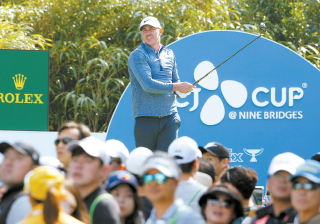 Brooks Koepka of the United States watches his shot at the 5th hole during the first round of the CJ CUP @ NINE BRIDGES on Jeju Island on Thursday. [JNA GOLF]

It didn’t take too long for An to pull ahead as he added his eighth birdie of the day on the par-4 16th. An hoped to extend his lead by two on the last hole, the par-5 18th, as he tried to reach the green in two. Instead, An ended up inside the hazard, narrowly missing the water but stuck in the long grass. Despite having to hit his third shot from there, An got onto the green but settled for a par after missing his birdie putt.

“I think it was a little weird today,” An said. “I wasn’t hitting it well during the practice rounds yesterday, the day before or just this week in general. I got worried this morning because I wasn’t hitting it well at the range. But it got better as I played. My shots were going to where I wanted them to go, and the distances were good so I had a lot of birdie chances.”

Golf courses in Jeju Island can offer a serious challenge when the wind is up. However, the players didn’t have much trouble during the first round, and the scores proved it. The change didn’t go unnoticed.

As the Presidents Cup, a biennial tournament between the International Team, excluding European players, and the United States Team is held in December, An’s lead has put him in a good position to finally join the team for the first time. Eight players on each team have already been named according to the world ranking, but there are still four more spots available.

“I think I should be able to make it if I win this tournament,” An said. “I really want to play this year. I have regrets for not making it the year before and four years ago. But this year, I think I have a shot if I play well. There are three tournaments left, and I just played one day so I think there is still a lot more golf to play. I want to show everything I can.”

Along with An, Niemann also shot a bogey-free round. Making seven birdies, he is only one shot behind An. Earlier in September, Niemann picked up his first win on the PGA Tour at A Military Tribute at The Greenbrier. With the victory, he became the first golfer from Chile to win on the PGA Tour.

Jason Day of Australia is right behind the leaders, ranked third at six under par, 66. Defending champion Brooks Koepka of the United States is tied for 15th at three under par, 69. Koepka had quite a round on Thursday, making three bogeys but coming back with four birdies and an eagle on the last hole.

Looking at the Korean golfers, they also got off to a strong start as four players, including An, managed to get inside the top 10.

On day one of the CJ CUP @ NINE BRIDGES, a total of 6,883 fans headed to the course to watch the players. This is quite an increase from last year, when the tournament had 6,000 spectators for the first round.