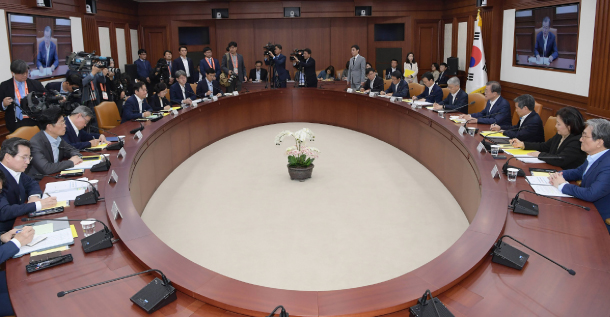 President Moon Jae-in presides over a senior government meeting on the economy at the Central Government Complex in central Seoul on Thursday. [JOINT PRESS CORPS]

President Moon Jae-in rallied support for an expansionary fiscal policy, calling for more spending in areas like construction as Korea struggles to deal with a slowing economy.

“The government has so far focused on preventing the economy from rapidly shrinking through an active fiscal policy and creating conditions for a rebound,” said Moon, presiding over a senior government meeting on the economy on Thursday at the Central Government Complex in Seoul. “These efforts need to increase.”

Moon’s comments lend support to the government’s proposal for an expansionary budget next year of 513.5 trillion won ($433.5 billion), a 9.3 percent rise from this year.

“The government has focused on construction investment that improves people’s living conditions,” said Moon, highlighting more spending next year toward the so-called social overhead capital (SOC) projects such as public infrastructure. “We will continue this direction and expand needed construction investment.”

The government plans to spend 22.3 trillion won on SOC projects next year, a 12.9 percent hike from this year.

Moon asked for support from the legislative body, which has recently ground to a halt due to a disagreement over reforms to the prosecution.

The remarks came as Moon attended the government meeting for the first time this year.

The meeting is usually presided over by Finance Minister Hong Nam-ki, who is currently in the United States for the Group of 20, World Bank and International Monetary Fund (IMF) meetings.

Moon’s unexpected appearance highlighted the urgency of the economic situation.

Korea also faces challenges on the domestic front as it recorded negative inflation for the first time ever in September, heightening worries of deflation.

Overseas institutions have downgraded Korea’s economic growth for this year far below the government target range of 2.4 and 2.5 percent.

The IMF recently revised Korea’s growth forecast this year to 2.0 percent from its earlier forecast of 2.6 percent, while downgrading global economic growth by 0.3 percentage points to 3 percent.

“The global economy is expected to record the lowest growth rate since the aftermath of the global financial crisis in 2009,” explained Moon. “Countries that have a high overseas reliance […] like Korea can only be greatly impacted by such a situation.”

“Time is needed for government policies to take effect,” said Moon. “There were difficulties to the jobs policy, however, after the government’s consistence effort […] employment improvements are becoming clearer.”

Last month’s employment rate was the highest for the month since data began to be recorded in its current form, at 61.5 percent, while the unemployment rate dropped 0.5 percentage points down to 3.1 percent from the previous year.

Moon recognized the limitations to job market improvements such as losses to the manufacturing sector and said the government should focus its efforts on such areas.