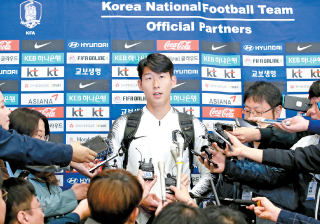 The biggest takeaway for Son Heung-min from South Korea’s World Cup qualifying match against North Korea was how physical his opponents played.

South Korea and North Korea played to a scoreless draw in Pyongyang on Tuesday, part of Group H action in the second round of the Asian qualification for the 2022 FIFA World Cup.

There were no fans or journalists at the match, and it wasn’t broadcast live in South Korea. Other than that four yellow cards were issued, little had been known about the contest until the South Korean team arrived home in the wee hours of Thursday.

In a video uploaded on Twitter by Joachim Bergstrom, Swedish ambassador to North Korea, players were seen getting mixed up in midfield in what appears to be a testy moment. Son, the South Korean captain, got himself in among North Korean players to help separate the sides.

“The opponents were pretty physical, and we exchanged some terse words,” Son told reporters at Incheon International Airport, west of Seoul. “It might have been their strategy. They played it rough, and they took exception to our own physical play.”

Son said the physical nature of the match took South Korea off their game.

“Rather than focusing on the match, we started worrying about trying not to get hurt,” he said. “It means a lot to have come out unscathed from a match like this.”

It was the first competitive match between the two men’s teams in Pyongyang, and it was held in the most unusual of circumstances.

The match was held without any spectators or foreign journalists. Son said he and the rest of the team were holed up in their hotel rooms with virtually no outside contact, having had their electronic devices banned before entering North Korea via Beijing.

“I think North Korea acted the way they did because they considered us a strong team,” Son said. “We tried to focus on the match and not get distracted by outside factors.”

Son added having to stay at the hotel was a blessing in disguise because he could catch up on his sleep and recharge before the match.

“Not all road trips will be easy, and the whole team and our support staff went through a lot this time,” Son said. “It’s too bad we didn’t get the three points, but hopefully we’ll be able to play better at home.”

Head coach Paulo Bento also mentioned that the match was an unusual experience. As for the business on the pitch, Bento noted that there were some testy moments and that the referee, Abdulrahman Al Jassim, halted the match too frequently. While the ref was trying to keep things under control, Bento said his players never had a chance to get into their groove.

“It wasn’t a good match at all. We didn’t execute what we’d prepared,” Bento told reporters at Incheon International Airport, west of Seoul, in the early hours of Thursday, after the team arrived home with a stopover in Beijing. “We didn’t have a great first half in particular, and the opponents held us in check. We got better in the second half, but there were too many stoppages of play because of the referee.”

Bento said the North Koreans played a physical match from the get-go, and they forced the referee’s hands to continually blow the whistle.

Following a scoreless first half, Bento made some tactical changes to begin the second half and made some substitutions to send in offensive-minded players.

“We were able to exploit some space between midfielders and defenders and had a few good chances,” the coach said. “We couldn’t convert those opportunities. But on the defensive end, we didn’t have too much trouble. I am just happy that our players competed hard in difficult circumstances.”

The match was expected to draw up to 40,000 fans, but for reasons yet unknown, North Korea kept even their own fans away.

“In football, the bigger the crowd, the more fun and entertaining the match is,” Bento said. “But we can’t control situations like this. We just tried to do the best we could under the circumstances.”

South Korea remained atop Group H with seven points. North Korea also had seven points, but South Korea held the tiebreak edge in goal difference, plus-10 to plus-3.

The top two teams from each of the eight groups, plus the four best runners-up, will advance to the next round in the regional qualifying matches.

South Korea’s next Group H match will be in Lebanon in November.