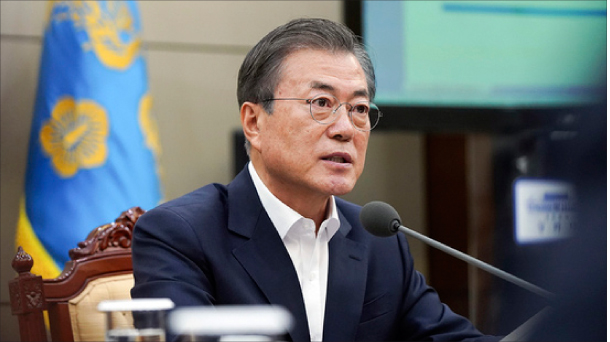 President Moon Jae-in expresses regret for all the controversy surrounding former Justice Minister Cho Kuk in a meeting with his senior secretaries at the Blue House on Monday after Cho resigned over a number of allegations against his family. [NEWS1]

CHOI MIN-WOO
The author is a deputy political news editor of the JoongAng Ilbo.

In April 1961, three days after the United States invaded Cuba, U.S. President John F. Kennedy held an official press conference and announced that the U.S. government planned the invasion and the operation failed. When a reporter asked why the State Department kept silent, Kennedy said that responsibility could not be avoided just because there were no additional announcement or discussion. He was the final person in charge, Kennedy admitted.

Experts say that an apology by a political leader should have three elements. First, it should be made publicly. Second, it should be directly targeted to the people. Third, it should clarify that all responsibilities end with the leader. Professor Yim Dong-wook of the Korea National University of Transportation said that the president’s apology which seems to have been made without sufficient contemplation could backfire.

President Moon Jae-in’s comment on controversial former Justice Minister Cho Kuk on Oct. 14 made some people embarrassed. He said he was sorry to have caused discord among people, but he did not apologize for appointing Cho in the first place. If he admits it was a mistake, the president would be retracting his own words. So he needed to be wary of being accused of accountability. However, a reshuffle is being discussed in the ruling party as well as in the opposition.

While many think that a president would rarely make an apology, President Moon has actually made a number of them in the past two and half years in office — mostly about the wrongdoings of the past administrations. He apologized to the families of the May 18 Gwangju Massacre victims, humidifier crisis victims and families of the Sewol Ferry victims. These were the events that he himself was not directly responsible for.

When President Moon attended the Busan-Masan Democracy Movement ceremony on Oct. 16, he said he extended deep condolences and an apology to the victims of the Yushin military dictatorship as the president. Some say that his apologies are strictly political. President Moon said at his inauguration two and a half years ago that if he made a mistake, he would admit it and tell the people, adding that he would not cover up disadvantageous public opinion with lies.