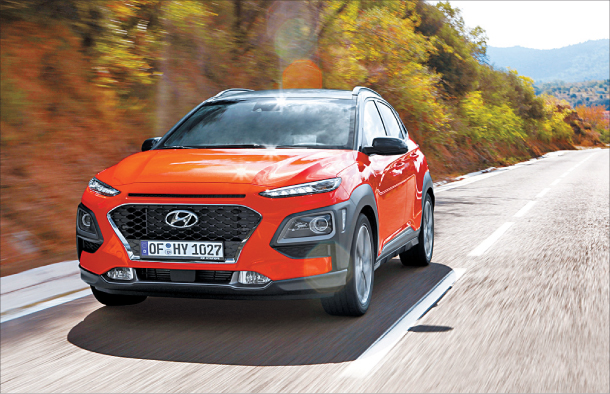 The competition was run by Auto Bild, a German auto magazine.

Auto Bild was founded in 1986 and is one of three major auto magazines in Germany, along with Auto Zeitung and Auto Motor und Sport.

Hyundai’s Kona was compared with Mazda’s CX-3, Ford’s EcoSport and the Dacia Duster, a compact SUV produced jointly by the French manufacturer Renault and its Romanian subsidiary Dacia.

The cars were assessed in seven categories, including powertrain, driving dynamics, environment and cost.

The Korean automaker said Kona earned top scores in four categories: body, powertrain, environment and driving comfort. The car’s total score was 503 points out of a possible 750 points, beating the No. 2 Mazda CX-3 by 22 points.

Auto Bild said the Kona had a stylish design and a powerful engine.

The car, however, received relatively low marks in terms of trunk space and price compared to competing models.

In July, the gasoline version of Kona scored first in a comparative test drive against three other small gasoline SUVs by earning high scores in terms of driving dynamic and driving comfort, Hyundai said.

According to Hyundai Motor, Kona has been expanding its presence in the European market in recent years.