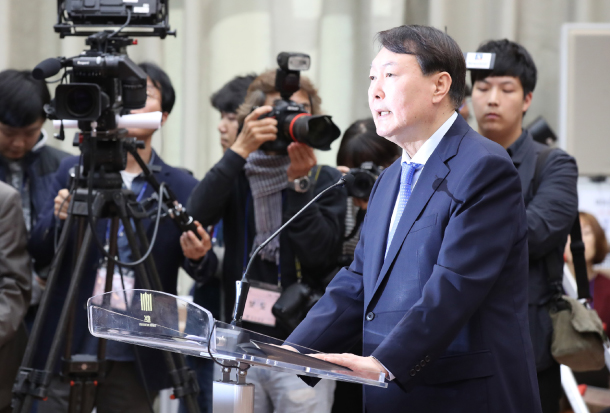 Prosecutor General Yoon Seok-youl Thursday dismissed the idea that he will step down and promised a speedy investigation into the alleged crimes of the family of former Justice Minister Cho Kuk, who resigned in the face of a massive scandal on Monday.

Yoon made the remarks at the National Assembly’s audit of the Supreme Prosecutors’ Office on Thursday. Lawmakers from the Legislation and Judiciary Committee participated in the audit, where Yoon made a rare public appearance.

Cho, a close ally of President Moon Jae-in and champion of Moon’s campaign to weaken the prosecution’s powers, resigned on Monday saying he wanted to be with his family as they go through a probe into suspected academic fraud and suspicious investments. Supporters of the ruling party and administration claim the probe is an attempt by prosecutors to resist the reforms and weakening of their power.

Ever since the probe started, Yoon has kept a low public profile. Since he attended the opening ceremony for an international conference against drugs on Sept. 25, he has made no public appearances.

At the audit, Yoon made his first public comment on the investigation into the Cho family. “Speedy process is our policy,” Yoon said. “Based on our procedures, we will conduct the probe as quickly and as accurately as possible.”

During the audit, Rep. Lee Eun-jae of the opposition Liberty Korea Party asked Yoon if he was aware of the growing arguments among members of the ruling party and the administration that he, too, should resign.

“I am aware of the demands through media reports,” Yoon replied.

“Do you think the probe into Cho is against the president’s directives, since the president told you, at the time of your appointment, that you must not try to please those with power?” Lee continued. “When you were investigating political enemies [of the administration], you were called a hero, but you have become a traitor now that you are investigating Cho. What do you think?”

“We conduct all investigations under the law and principles,” Yoon said. “We are handling all cases by the book, and we will continue to do so.” He said prosecutors do not make calculations as to what is most beneficial to them.

Lee also asked Yoon about the ongoing investigation into Cho’s family, particularly about the case involving his wife Chung Kyung-sim. Asked if she is so seriously ill that she cannot be questioned, Yoon refused to respond in detail. “The suspect’s health condition is part of the investigation,” Yoon said. “I don’t receive all information, and I cannot discuss what I know.”

After Cho’s resignation on Monday, his wife’s health became a major issue. According to Chung’s lawyers, Chung was recently diagnosed with a brain tumor and symptoms of a stroke. To postpone a round of questioning, Chung submitted Tuesday a document to the prosecution from an orthopedic clinic confirming that diagnosis, but prosecutors said it was insufficient. (She attended her sixth questioning session on Wednesday.)

At the audit, Thursday, Lee said that Chung’s medical document lacked a doctor’s name, license number and an official seal from the clinic. Yoon replied that the investigation team asked Chung to submit additional medical data.

Chung’s lawyers told the JoongAng Ilbo on Thursday that she was diagnosed with a brain tumor and cerebral infarction at a general hospital, not an orthopedic clinic.

The document might have been labeled as being issued by the orthopedics department of the hospital, but it clearly stated the medical codes indicating her illness, they said. The lawyers said they do not want to tell the prosecution the name of the hospital because she is admitted there and other patients and doctors may suffer from unwanted media attention.

Sources in the prosecution said Thursday they could not accept that argument. They said the law requires a suspect to submit a document that contains all necessary information to prove his or her admission to a hospital. It also expressed displeasure with the assumption that the prosecutors will tell the media the name of the hospital.

On Thursday, Yoon also addressed a recent report by The Hankyoreh that linked him to an infamous sex party hosted by construction contractor Yun Jung-cheon, demanding an apology from the newspaper. Last week, The Hankyoreh reported that prosecutors, during a reinvestigation of a sex scandal involving former Vice Justice Minister Kim Hak-eui, obtained testimony from Yun that Yoon also received sexual favors at his private villa in Gangwon but did not look into it.

Yoon has filed a libel suit against the journalist and others involved.

“I have faced many malicious attacks, but I have never sued anyone,” Yoon said. “But this report was published without any confirmation. It is not a personal issue, but it is an issue about the prosecution.”

Yoon said he may consider withdrawing the suit if the newspaper publishes an official apology and an explanation why it ran the report on the front page. He also made clear that he was not acting emotionally.