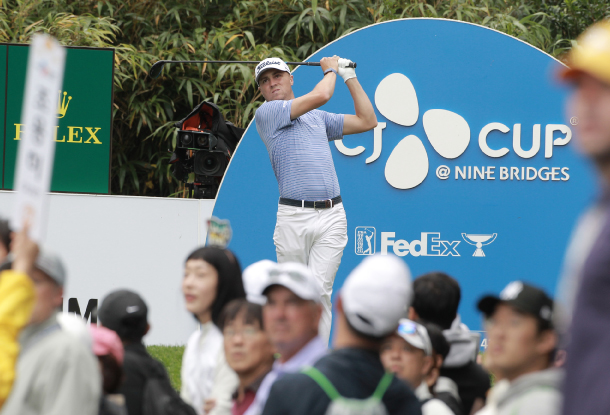 Justin Thomas of the United States hits a tee shot at the fifth hole on Day 2 of THE CJ CUP @ NINE BRIDGES at the Club at Nine Bridges in Jeju on Friday. [YONHAP]

JEJU ISLAND – Justin Thomas of the United States made his way up the leaderboard after Day 2 of the CJ CUP @ NINE BRIDGES at the Club at Nine Bridges in Jeju on Friday.

The inaugural champion shot a bogey-free round of nine under par, 63, to take a two-shot lead in the 78-player field. Thomas got off to a great start on Day 2 by starting his round with four straight birdies and another on the par-4 eighth.

After finishing the first half of his round with five birdies and four pars, Thomas continued his streak in the back nine. He made birdies on the par-4 10th, par-5 12th, par-4 14th and finished his round with his ninth birdie of the day on the par-5 18th.

“I played well,” Thomas said. “It was very solid. I felt like I didn’t do anything unbelievably. This was a very stress-free day. I just kind of kept the ball in play and hit some good irons. I think I hit every green, and I made a couple putts early. Then in the back nine, I got a couple close to the holes where those birdies came easy. So again, this was a very easy 63, you can somehow say that. But hopefully I’ll be able to keep some of that play going through the weekend.”

This is the second time that the inaugural champion has shot a round of 63 at the Jeju course. Although both were good rounds, Thomas said that his round of 63 two years ago was probably a better one as it was shot in windy conditions.

“I would say that one two years ago was probably better,” Thomas said. “It was quite a bit windier, if I remember it correctly. I’ll take 63 on any condition, on any course any day. [This year] there wasn’t much wind, which made it a lot easier to score.”

Korea’s An Byeong-hun, who was the leader after the first round, is now two shots behind Thomas as he shot a round of three under par, 69, on Friday. An, who started his round on the 10th hole, began with a bogey, but quickly made up for it by making three birdies in his first nine holes. Then, he made back-to-back birdies to get to 12 under par but added a bogey on the par-4 sixth to finish his round at 11 under par after the first two rounds.

“It was alright in the first half, but it was getting a little difficult to hit my shot close [to the pin] because the wind started to pick up,” An said. “I think I was hitting O.K. Since I can’t play well every day, if my shots get better over the weekend, I can make birdies.”

An is tied for second with Danny Lee of New Zealand. Lee also had a great round as he was tied for the lead until his 17th hole. However, as he finished with a bogey on the par-5 18th, Lee settled for a round of six under par, 66. The three players will tee off their third round at 9:45 a.m. today, starting from the first hole.

Jordan Spieth of the United States also made a big jump in the leaderboard as he moved up 25 spots to be tied at fourth at nine under par, 135. Spieth shot seven under par, 65, on Day 2.

Once again, Korean golfers continued their solid streak, as there are now three Korean golfers, including An, ranked inside the top 10.