The automaker, 74.65 percent owned by Mumbai, India-based Mahindra & Mahindra, has been suffering from mounting losses. Its net loss grew from 26.1 billion won in the first quarter to 51.5 billion won in the second quarter and then 107.9 billion in the June-September quarter. 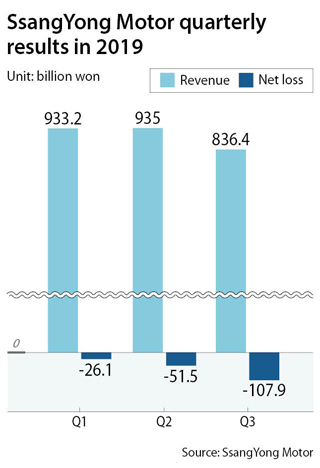 The automaker said deteriorating earnings were largely due to sales declines and an increase in operating costs amid intensified competition.

While the automaker has been depending a lot on the success of its compact SUV Tivoli, the compact SUV market has become increasingly competitive with the launch of Hyundai Motor’s Venue SUV and Kia Motors’ Seltos SUV. Tivoli used to be the top-selling compact SUV in the local market, however, its ranking slid to fourth in August.

According to data from SsangYong, the number of cars it sold declined by 11.4 percent year-on-year from 35,136 units in the third quarter of 2018 to 31,126 units in the same quarter this year.

In pursuit of a recovery, the carmaker is banking on face-lifted versions of its cars released earlier this year, including an upgraded Tivoli SUV. Most recently, it released a gasoline version of its Korando SUV in August.

The company said in a statement that it is striving to expand global sales through visits to its dealerships in Europe. In addition, it has signed a product licensing deal with Saudi National Automobiles Manufacturing (SNAM) earlier this month, which allows SNAM to assemble SsangYong’s Rexton Sports and Rexton Sports Khan SUVs. The carmaker is hoping the deal will help it expand reach in the Saudi Arabian market.

“Despite the launch of new products, the losses have increased due to contracting industrial demand and heated competition,” said Yea Byung-tae, CEO of SsangYong Motor. “We are committed to normalizing management through aggressive efforts to expand global sales and profitability improvement based on reform.”