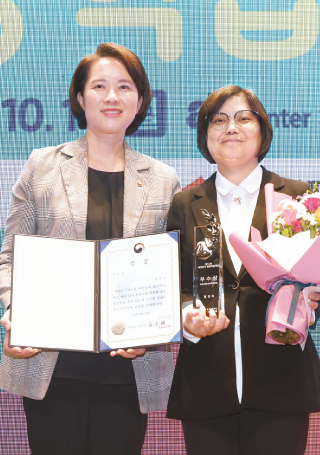 Yoo Eun-hae, the deputy prime minister for society and education minister, left, poses for a photo with award recipient Chung Jin-sook, president of Chung-ju Open Special School in North Chungcheong, right, at the 16th Korea’s Lifelong Education Awards held at the aT Center in Yangjae-dong, southern Seoul, on Monday. [MINISTRY OF EDUCATION]

When Chung Jin-sook heard a person in a wheelchair appeal, “I want to study, but there is no place for me,” she knew she had to do something.

Though she was a mathematics teacher at a night school at the time, she thought securing a learning place for people with disabilities was a more important task.

She established Chung-ju Open Special School in 2005 in North Chungcheong and this year was awarded at the 16th Korea’s Lifelong Education Awards held at the aT Center in Yangjae-dong, southern Seoul, on Monday. The event, organized by the Ministry of Education and co-sponsored by the National Institute for Lifelong Education and the JoongAng Ilbo, was aiming to reward people who contributed the spreading of lifelong education. Chung received an award in the individual category.

The school began in a 33-square-meter (355-square-foot) rented apartment with no desks. “I was confident that despite the lacking environment, my passion for teaching was second to none,” said Chung reminiscing about the past.

Chung’s school quickly began to garner interest, and not just from people with disabilities, but also from adults who hadn’t had the chance to further their education or who never had a chance to learn at all.

As more students came, Chung twice moved to larger places and added new classes including preparation for the university qualification exam and computer literacy. The school, which began with just three or four students, now has 200. Also, of the 6 special literacy education schools in Chungju, Chung’s school has held the title of producing the most students who passed the university qualification exam for seven years in a row.

Chung’s past experiences drove her interest in providing education for the less privileged. She was hired in a large company after graduating from a vocational high school but quit just two years later, despite the high salary, because she dreamed of attending university.

Unfortunately, after entering university and while preparing to study abroad in Australia, her dream was shattered. She was diagnosed with lupus, a systemic autoimmune disease that occurs when one’s immune system attacks its own tissues and organs. The disorder caused her whole body to become swollen. “It was harder to acknowledge the fact that I had to give up studying abroad rather than that I was sick” Chung said.

But a newspaper advertisement for a night school teacher changed everything for Chung. She started her new life as a mathematics teacher at a night school for preparing for the university qualification exam. Then, she entered university again at the age of 27 in order to become a better teacher and acquired licenses for literacy education for the primary school curriculum, social work, child care and geriatric care. “I didn’t realize the fact that I was sick when I was studying,” Chung said. “I want to help provide education for the less privileged to the best of my ability.”

“The only way to respond proactively toward the future change in the fourth industrial revolution is learning,” Yoo Eun-hae, the deputy prime minister for society and education minister, said at the award ceremony. “It is the time to plan a new life beyond school education.”

Another award recipient in the individual category was 68-year-old Sung Gwang-ho who became a master of boiler systems despite losing his right index finger in an accident at the age of three. He also lost his father at the age of 15 and mother at 21, but he never gave up learning. Although Sung learned the intricacies of boiler systems in early adulthood, he acquired some technical licenses including one related to heat control and environmental management engineering. Sung, through lifelong education, became a master of boiler systems of Korea in 2002 and was selected as a Korean master technician in 2008.

“I don’t think opportunities come on their own. We need to create them,” Sung said. “I kept studying despite the poor circumstances, and it helped me to achieve my dream.”