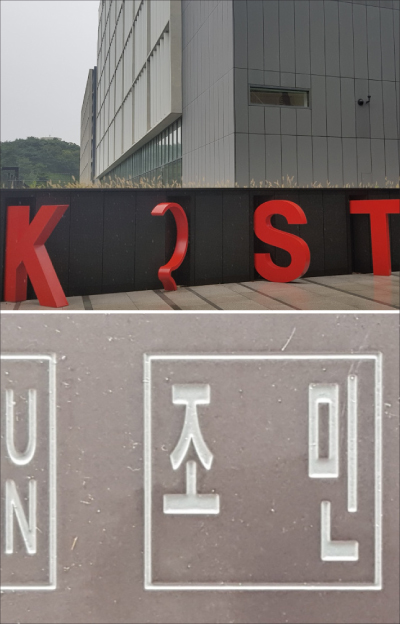 Cho Min’s name was engraved on a sculpture built on the KIST campus in Seoul to mark its 50th anniversary. [CHOI JOON-HO]

A scientist who had created a fake internship record for the daughter of former Justice Minister Cho Kuk has been dismissed from his leadership post at the state-run Korea Institute of Science and Technology (KIST), the JoongAng Ilbo reported Thursday.

Dr. Lee Kwang-ryeol was dismissed as the head of the Technology Policy Research Institute as of Wednesday, a KIST official told the JoongAng Ilbo on Thursday.

The source said Lee had expressed his intention to step down from the post to take responsibility for disgracing the institute after issuing the fake internship certificate to Cho’s daughter. KIST President Lee Byung-gwon accepted his intention, the source said.

Further disciplinary actions against Lee Kwang-yeol, currently working as a researcher with no other title, will follow through a formal process, the official also said.

According to the official, Lee is an alumnus of the same elementary school as Cho’s wife, Chung Kyung-sim. In July 2011, Cho’s daughter Cho Min, who was a sophomore student of Korea University, signed a one-month student researcher contract with KIST that was arranged by Lee. She was assigned to work at the laboratory of another researcher, but she only showed up for two days.

Two years later, Chung asked Lee to send an email to confirm her daughter’s experience at the institute. At the time, Cho Min was a senior student who was preparing for graduate school admission. Although she only visited the institute for two days, Lee still created a record that she worked there for three weeks.

Using the record sent by Lee, Chung allegedly created a fake certificate that contained Cho Min’s name, identification number and other information. Rep. Kwak Sang-do of the Liberty Korea Party (LKP) inquired with Pusan National University (PNU)’s admissions office and found out that Cho Min submitted the KIST certificate as part of her medical school application. She is currently a student there.

Meanwhile, KIST said Friday that it will erase Cho Min’s name from a sculpture built on its campus in Seoul to mark its 50th anniversary. Her name, along with other researchers, was engraved on the sculpture.

At the National Assembly’s audit on the state-run institute, KIST President Lee Byung-gwon said Friday that the institute will investigate all 26,000 people whose names are engraved on the sculpture and erase those unfit to be memorialized.

The issue was first raised last week at an earlier audit of state-run institutes including KIST. Rep. Kim Sung-tae of the LKP complained that Cho Min’s name was on the sculpture.

“Names of all researchers who worked at KIST were listed by years, and her name was there,” Kim said, complaining about legitimacy.

Opposition lawmakers demanded that her name be removed, and Rep. Kim Sung-soo of the ruling Democratic Party said it is unfair to only delete her name. “There must have been other people who disgraced KIST with research irregularities,” Kim said. “It is not fair to just remove Cho Min’s name. If you want to remove it, you need to create a standard first.”

Following the remark, KIST President Lee told the lawmakers on Friday that an internal review will take place first to see who is unfit to be on the sculpture and remove their names.

Meanwhile, the Seoul Central District Court started the trial of Chung, criminally charged last month with faking an academic award for her daughter. Chung was charged with obstructing the business of Dongyang University, where she works as a professor of English, by allegedly fabricating an award Cho Min had submitted as part of her PNU medical school application.

The first session of the trial, however, ended after only 15 minutes, and Chung was absent. Chung’s lawyers said it was unfair that the prosecution did not share full information on evidentiary materials. The prosecution said it had to omit some crucial information because an investigation into a co-conspirator is still ongoing.