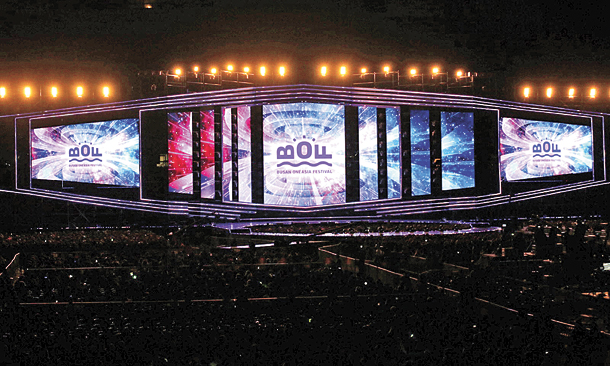 The annual Busan One Asia Festival (BOF), a major annual K-pop concert in the city of Busan, kicked off Saturday with a star-studded lineup.

The festival will run through Oct. 25 and present K-pop performances at major venues in Busan.

The K-pop concert on the first day of the festival will feature 16 K-pop groups and soloists, including Super Junior, NU’EST, Mamamoo and ITZY.

The Family Park Concert on the last day of the show on Oct. 25 at Hwamyeong Ecological Park will again bring together an army of high-profile K-pop performers, including Kang Daniel, Lovelyz, and Gummy as well as g.o.d member Kim Tae-woo.

The lineup also includes boy bands Stray Kids and Ateez, as well as popular girl groups like GFriend and (G)I-DLE.

On the sidelines of the weeklong festival, the city of Busan will also host related exhibitions, activities and performances at major venues along Haeundae Beach, according to the organizer.