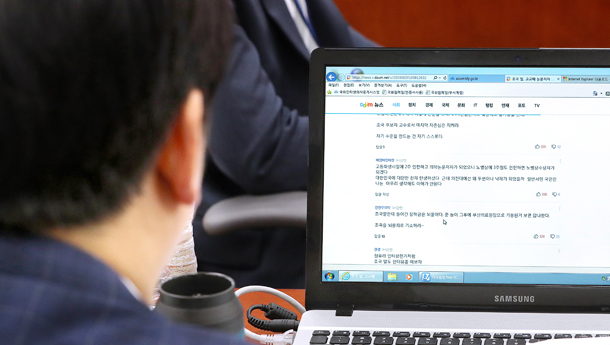 Road construction went on for months in a residential neighborhood in London. I had hoped the chronic bottleneck would be eased afterwards. The road blocks were removed recently. I was surprised to find the roads were further narrowed to widen the pedestrian walkway. Although the design must have been for safety, I found the idea of converting car roads into walkways bewildering.

I bring this up to discuss Korea’s fiery and impetuous cyber community culture. Korea is world’s most connected society, and most get their news through internet portal sites. These portals list the most read news based on the traffic on viewership and the train of comments. The most searched words are ranked at the front page. Such digital platforms do not exist in Europe. Google links readers to news organizations and does not post or edit news. Readers can write comments on each article, but to do so, they must log in and write their real name.

Comments have gone beyond free expression of opinions. Another celebrity has cut her life short after battling cyberbullying and attacks. Rivaling fronts competed with banners for or against former Justice Minister Cho Kuk in flame wars. Many rant out vulgar language and anger on the Internet. They resort to tone and language they would never dare to use in real life.

The mainstream debate spaces have become dysfunctional. Rivaling politicians are too absorbed in themselves to sound convincing. The legislature is no longer serving as a place for discussion. The media no longer delivers diverse opinions or referees opposing views. The ideological fronts have broken down into either conservative or liberal or pro or against Cho and attack anyone on the other side. The fissures are filled by obnoxious anonymous postings and comments.

European states institutionalized strong measures against mean internet postings. Since they cannot punish individuals, they place responsibility on platform providers. Germany last year passed a law that can levy a maximum of $53 million on hate speech, criminal material and fake news on social networks. Such content began to be removed from Twitter and Facebook. The regulation does not apply to personal messaging platforms. Since portal sites make money from the masses, they too should become responsible. Media organizations who also carry comments should be no exception.

Britain in 1986 enacted the Public Order Act. Any expression that can sound threatening and slanderous can lead to fines and punishment. It makes no exception for speech on social networks and online spaces. Racial or religious discrimination can lead to two years in prison. Korean politicians may not like such a harsh law. But some things must go backwards, like the British who narrow car roads to make way for walkways.