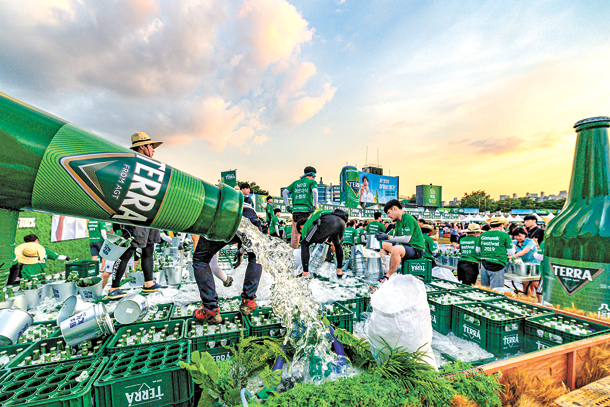 Korea’s beer market may be in the midst of a seismic change, as a new beer takes the country by storm and as the boycott of Japanese products creates an opportunity for local brewers to change their fortunes.

Oriental Brewery (OB), maker of Cass and OB beers, is the clear market leader, with an estimated 60 percent share.

According to Korea Agro-Fisheries & Food Trade, sales of Cass Fresh and Cass Light totaled 331.1 billion won ($281.9 million) in the second quarter, 41.2 percent of the market.

Cass seems untouchable, but OB may not want to let its guard down, yet. The statistics above don’t include Cass sales in entertainment establishments and restaurants, and it is in these places where the competition is demonstrating considerable strength.

Unofficial sales of beer at entertainment establishments and restaurants account for around 60 percent of the total market.

Recently, that number has spiked as customers are mixing Terra beer and Chamisul soju, calling it Tesula, which sounds a bit like Tesla. Whether by sheer luck or meticulous marketing, Terra has boosted its popularity as customers mix beer with soju, possible due in part to the Tesula wordplay.

Introduced by Hite Jinro on March 21, 220.4 million bottles of Terra beer have been sold as of Aug. 27. According to a survey on the market share of beverages in restaurants in Gangnam District in southern Seoul and Yeouido and Hongdae in western Seoul conducted by Meritz Securities on Wednesday, Terra beer beat Cass beer in terms of market share 61 to 39.

With Terra beer on the attack, Cass is fighting back. Some call this battle the “Cass-Terra War,” which sounds like the Castella cake.

“Starting Oct. 21, OB will lower the release price of all Cass beer by 4.7 percent,” said an official from OB, announcing the fourth price adjustment in 2019. The release price of bottled Cass beer (500 milliliters), OB’s best-selling product in restaurants, went up to 1,203 won in April, from 1,147 won. Then in July, the price went down to its original price of 1,147 won. Though the company increased the price again to 1,203 on Sept. 1, it has now returned back to 1,147 won this time.

Until last year, breweries needed permission from National Tax Service before changing the release price. Though breweries can now change the price first and report it later, it’s difficult for a liquor company to alter the price frequently, as the industry is tightly controlled by the government, which is why those in the liquor industry view repeated changes in OB’s release price as a plan to “keep Terra in check.”

“The decision was made as part of an effort to respond to the ever-changing market situation - nothing special behind it,” said an official from OB. “The price increase was motivated by rising costs, but we were able to cut the price thanks to the change in tax policy [tariff duty].”

“Typically, it’s a well-accepted fact in the liquor industry that increasing 1 percent in beer market share requires 10 billion won of marketing,” said an official from the industry.

“But this year, Terra as a new player and Korea’s boycott of Japanese beer are shifting the ground beneath the feet of the beer industry, which doesn’t really happen often.”