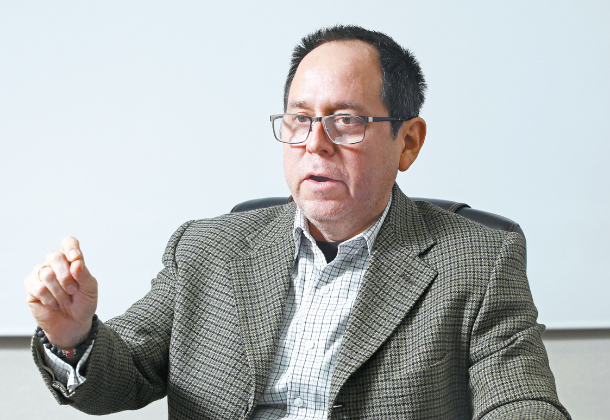 Erick Garcia, director of PromPeru in Seoul, says Peru hopes to increase the export of alpaca fiber to Korea through the Per?oda Asia fashion exhibition, which is scheduled to take place in Gangnam District, central Seoul, on Tuesday. [PARK SANG-MOON]

Peru is known for the Inca Empire, especially the Unesco World Heritage site of Machu Picchu. It hopes to be known for something else: the fiber of the alpaca, a llama-like animal related to the camel.

Peru - home to 80 percent of the world’s alpaca - currently exports garments made with the animal fiber globally, including to the United States. Hermes, Chanel and Max Mara are some of the buyers of the fleece, which is as soft as cashmere, warmer than wool, hypoallergenic and waterproof.

To raise the profile of the fiber in Korea, Peru annually holds PerúModa Asia, where Peruvian companies display garments and textiles made with Peruvian alpaca fibers to seek opportunities with Korean firms. Co-organized by PromPeru and the Embassies of Peru in Korea, China and Japan, this year marks the third anniversary of the exhibition.

The event will kick off on Oct. 22 in Gangnam District, southern Seoul, and will continue in Tokyo and Beijing.

PromPeru is an agency responsible for promoting Peru. It is under the Peruvian Ministry of Foreign Trade and Tourism.

Through the event, Peru achieved $1 million of deals in Korea last year. The agency hopes to hit at least $1.1 million of business opportunities in Korea this year.

“Peru exports $2.4 billion [worth] of products to Korea a year,” said Erick Garcia, director of PromPeru in Seoul, who was appointed to work at the Seoul branch two weeks ago from Rotterdam, the Netherlands. “So far, we mainly export minerals like copper, but we are developing all the industries, like seafood and agribusiness. Among them, we have the textile sector, which grew 50 percent in Korea last year compared to the previous year. Our effort shows what we can do in this market.”

To discuss more about Peru’s alpaca fiber and business possibilities between Korea and Peru, Garcia joined the Korea JoongAng Daily for an interview at his office in central Seoul on Oct. 10.

Q. This year’s is the third for PerúModa Asia. Peru last year generated a $1 million worth of exports from the event. What’s the goal for this year?

How significant is Korea in terms of alpaca exports?

We hope to focus on the Korean market. We know that Korean consumers like cashmere a lot. But they also like trying new things and staying in fashion.

Korean people have high acquisitive power, so we choose Korea as the first location. We hope Korean consumers’ tendency to try something new will lead them to choose alpaca fur over cashmere.

As far as I’m concerned, Japanese consumers are more traditional and conservative than Korean consumers. I believe we also have an opportunity in China due to the huge market size.

What makes alpaca better than cashmere?

Alpaca fiber is lighter than cashmere. Alpacas live in 4,000 meters (13,100 feet) above the sea level, so they need to preserve as much energy as possible to stay warm.

They have air bubbles inside the hair to retain body heat. That makes their hair lighter while giving off warmth. Alpaca fur also has a big diversity of colors.

Alpaca fur is also sustainable. They neither destroy soil nor grass, so raising them does not hurt the environment.

[Alpaca weigh less than other livestock that produce fiber and are not hard-hoofed animals. They, therefore, cause less soil compression. Instead of plucking roots, they bite grass, which allows it to regrow.]

But global fashion houses over the past years have begun adopting the fur-free movement in pursuit of sustainable business. Do you think alpaca fur exports could be affected by the trend?

Peruvians treat alpacas like their pets. We believe animals with nice lives have better fur. We take good care of the animals.

We produce alpaca fur in a traditional way with small farmers instead of an industrial way, as is done in other countries that export the fur.


Apart from alpaca fur, what other Peruvian products do you think should be exported to Korea?

Among textiles, we also have pima cotton. It is already being exported to Korea, but we hope to boost the exports. Organic pima cotton could be especially good for children since they are more sensitive to the fiber of the clothing they wear.

Since the Korean beauty industry likes organic, sustainable products, Peruvian tara gum could be used in the manufacturing of natural and organic cosmetics products.

Peru could work in cooperation with Korea in technology. Korea is a technological market. We’re not a technological country yet, and we want to be and would like to learn from the best. We’re working among embassies and with the Korea Trade-Investment Promotion Agency to find the way.

What technologies are you referring to specifically?

Any technologies that could be applied to industries from logistics to textiles and fresh produce that could help [develop industries] like learning how to better can or freeze food. We need to know more, and I believe Korea is decades ahead of us. In all the industries we export to Korea, we have an opportunity to learn.

What parts of Peruvian culture do you think could be connected to business opportunities in Korea?

Gastronomy. There are hardly any Peruvian restaurants in Korea. I know Korean consumers like to try new things, and they like strong flavors. Our food has been influenced by Spanish and Incan cultures as well as Chinese and Japanese cuisine due to Asian immigrants in Peru.

Some of the representative Peruvian dishes are ceviche, made from raw fish and lemon, and lomo saltado, a stir-fried steak.