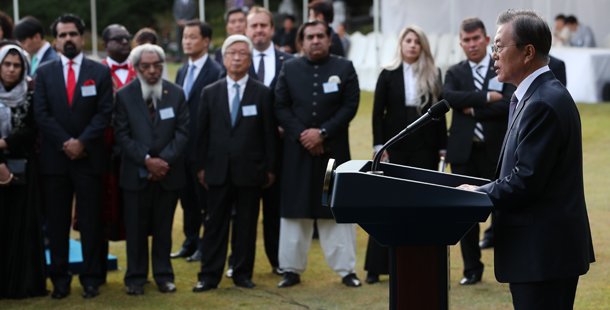 Two months before the 1964 Tokyo Olympics, the Japanese police receive a letter. The sender claims that he will interfere with the Olympics and could prove it possible in a few days. He added that demands will be made soon. A series of explosions happen around Tokyo, and a culprit who plans an explosion at the main stadium demands 80 million yen ($737,262). This is the plot of Hideo Okuda’s novel “Olympic Ransom.”

The story threatening the state by taking the Olympics hostage came to mind because of the recent news about promoting the joint hosting of the Summer Olympics by South and North Korea. At a reception with diplomats in Seoul on Oct. 18, President Moon Jae-in asked for attention and support for the Seoul-Pyongyang Olympics in 2032. Last month, he met with International Olympic Committee (IOC) President Thomas Bach and shared his intention to pursue a jointly-hosted bid.

The Olympics is an expensive event. It costs a lot of money to build the facilities necessary to put on the world’s biggest sporting event. According to the motion on the 2032 Seoul-Pyongyang Summer Olympics Bid that Seoul proposed last year, the operation budget for the opening and closing ceremonies, stadium repairs and game management would reach about $3.4 billion. This does not include infrastructure investments on roads and railways. Considering North Korea’s poor infrastructure, the cost is expected to be astronomical. After the event, various facilities will also likely turn into white elephants.

Besides the issue of calculating the actual cost or loss after the event, the bigger problem is the uncertainty of North Korea’s change of heart. Our national soccer team’s away game in Pyongyang was held without spectators, cameras or reporters. That showed that my worry is not totally groundless. Does anyone care about the struggle of the people who have to pay the unpredictable Olympic ransom for the cause of promoting peace in the Korean Peninsula?