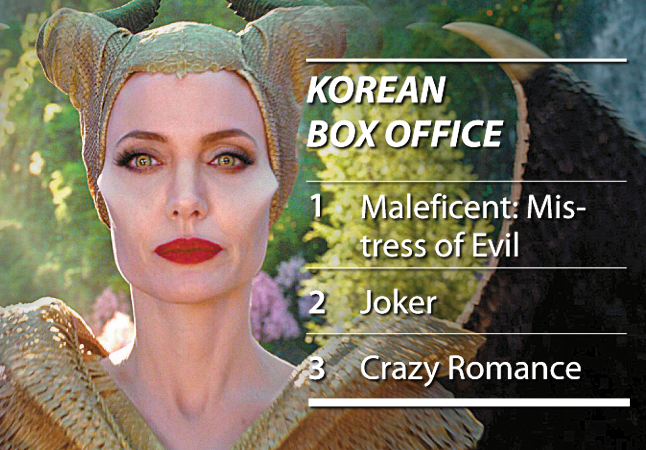 “Maleficient: Mistress of Evil” reigned over “Joker” as it debuted in the number one spot at the weekend box office. [WALT DISNEY COMPANY KOREA]


Last week’s movie theater hits had to make way as “Maleficent: Mistress of Evil” strutted straight to the top of the local box office over the weekend.

Angelina Jolie’s reprise of the all-powerful fairy Maleficent drew 540,000 people to 1,106 screenings across the country. The actor won over local audiences with her performance of the intimidating fairy who still loves Aurora as her own.

The story continues in the realm of Moors where Queen Aurora takes care of fair folk under guidance of her fairy godmother, Maleficent. Although prince Phillip’s kiss failed to break Maleficent’s spell, his love for her blossomed into a passionate relationship. Eventually, the prince proposes to Aurora and she accepts.

However, both Maleficent and Queen Ingrith are hostile to the marriage - the former out of the protective love she feels for Aurora, and the latter due to the hatred she feels to the creatures of the Moors. However, the queen cleverly hides her feelings and forms a plan to initiate a war between humans and the Moor realm, with her ultimate goal being to destroy the fair folk for good, including Maleficent.

The two-week box office reign of hit film “Joker” ended, as it descended to second place with 390,000 moviegoers seeing the film at 978 screens. Nevertheless, the film surpassed 4.5 million in ticket sales on Sunday.

“Love, Again,” a local romantic comedy film released last week, landed in fourth place - a rather disappointing result for its first weekend - selling a total of 90,000 tickets for 645 screenings.

Starring veteran actors Kwon Sang-woo, Lee Jung-hyun and Lee Jong-hyuk, the film, like “Crazy Romance,” focuses on the realistic side of relationships. The story revolves around Hyun-woo and Sun-young (played by Kwon and Lee Jung-hyun) who hold a divorce ceremony to officially announce their separation to their associates, friends and family.

Although the two seem to enjoy their single lives, they cross paths again when Hyun-woo happens to meet his high school friend, Sang-chul (played by Lee Jong-hyuk), through work, and Sang-chul confesses that he happens to be dating Sun-young.

Last but not least, “Man of Men” dropped two ranks and finished off the weekend in fifth place, with 66,000 people seeing the comedy at 485 screenings.

At the North American box office, director Bong Joon-ho’s acclaimed film “Parasite” reaped $1.2 million ticket sales over the weekend as the Korean Palme d’Or winner slowly expands to more American theaters. According to Neon, the film’s North American distributor, the film will be expanded to between 50 to 75 more American cities in the coming weeks.